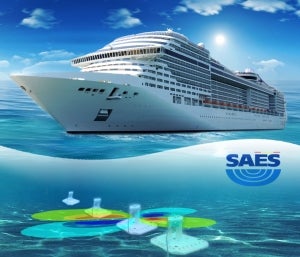 The dataset for the study has been obtained with the multi-influence range system (MIRS), which allows to register and analyse simultaneously magnetic, electric, seismic, acoustic and pressure influences.

The study will be presented next Tuesday 21 June at 2pm by Antonio Sánchez, the head of I+D+i of SAES (Sociedad Anónima de Electrónica Submarina) inside the session 3B: Undersea Platforms II – Advanced Submarine Subsystems.

In the defence field, the reduction of the vessel’s multi-influence signature, as a means to reduce their detectability, configures nowadays as a vital importance element to accomplish their missions and even for their own survival.

During recent times, this interest has also moved towards the civilian vessels field, centred mainly in the reduction of the marine environment pollution due to the different energy radiations generated by vessels.

In this context, the study centres on the use of the vessel’s multi-influence signature as a basis to perform firstly their detection, and secondly their classification from the results of the analysis of correlation among their set of signatures. It is based on real signals from vessels obtained with the multi-influence measurement system, MIRS.

The use of this technique permits to increase the capability of use of the MIRS system in fields as the mine warfare or the protection of harbour environments, acting either as an independent system or integrated with other sensors, such as the AIS system or surveillance cameras, which collaborate together in the classification process.

At the same time, this technique permits to configure databases of classified contact multi-influence signatures in an automated way.

The MIRS is the system used to measure the emissions of vessels.

The SAES multi influence range system (MIRS) for surface vessels and submarines provides real influence measures (magnetic, electric, pressure, acoustic, and seismic) in a real and controlled scenario, to successfully counter related threats. MIRS is among the best systems in the world in its class and compared to fixed stations.

A decisive advantage of the MIRS system is that due to its portability, low weight, low power consumption and high performance, it can obtain all signatures of the ship in different geographical locations.

MIRS has been primarily designed using Commercial Off The Self (COTS) components for maximum reliability at minimum cost.