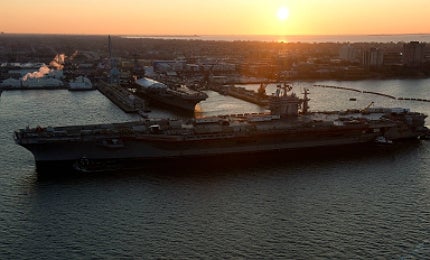 The contract will see HII refuel the ship’s reactors and perform extensive modernisation work on more than 2,300 compartments, 600 tanks and hundreds of systems, while also including upgrades to the vessel’s flight deck, catapults, combat systems and island.

The overhaul will also see the carrier receive Joint Strike Fighter modifications, allowing the aircraft to operate from it when it returns to service in 2017.

The aircraft carrier’s overhaul programme was delayed by six weeks due to defence budget uncertainties and a lag in funding for the work.

The prototype was developed as part of a nationwide, multi-university project, aiming to develop self-powering, autonomous machines that support various missions, including surveillance, oceanographic mapping and monitoring of ocean currents.

Based on the real giant jellyfish Cyanea capillata, the Cyro robotic prototype follows a previous, smaller, hand-sized version of the robot, known as RoboJelly, which is also being constructed by the same research team.

The US Navy awarded a firm-fixed price contract to Boeing to develop and deliver high altitude anti-submarine warfare weapon capabilities using smart bomb technology to serve as an anti-submarine weapon.

Boeing will adapt technologies from its Joint Direct Attack Munition and Small Diameter Bomb, to help in the development of the glide weapon to reduce development risks and the cost for the navy.

The US Defense Security Cooperation Agency notified Congress of a potential foreign military sale of Tomahawk Weapon System support and associated equipment to the UK.

The UK requested support for the weapon system, including missile modifications, maintenance, spare and repair parts, system and test equipment, as well as engineering support.

Enabling lifecycle support, the follow-on support will also help in maintaining the system’s operational effectiveness and safeguard its deployed troops, regional security and interoperability with the US.

The latest configuration overhaul includes the installation of Saab Seaeye SM7 thrusters and a completely re-designed electronics, communication and monitoring system, enabling better control and monitoring of system performance by the pilot and supervisor.

The system has been designed to support range of missions for military, including search, salvage, aircraft crash site investigation and recovery, test weapons recovery and submarine emergency ventilation and decompression system (SEVDS) deployment.

The Global Submarine and MRO Market in Israel to 2025: Market Brief

The Police Modernization and Counter Terrorism Market in Saudi Arabia to 2024: Market Brief

The Police Modernization and Counter Terrorism Market in the United States to 2024: Market Brief

The Global Submarine and MRO Market in Saudi Arabia to 2025: Market Brief

The Police Modernization and Counter Terrorism Market in Argentina to 2024: Market Brief