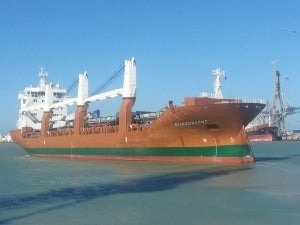 The first four fast landing crafts (LLC) for the Royal Australian Navy departed on March 8 onboard a cargo from Navantia facilities in Puerto Real. It is scheduled that the cargo will arrive at its destination in mid-April.

The rest of the eight units are being built by Navantia in different stages of construction, and will be delivered in groups of four during the upcoming months.

The contract for the construction of the series of 12 LLC was signed in September 2011. The landing crafts are destined to operate with the ALHD "Canberra" and ALHD "Adelaide", strategic projection ships, similar to LHD "Juan Carlos I", also built by Navantia in cooperation with BAE Systems.