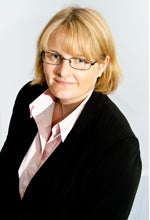 BMT Defence Services, a subsidiary of BMT Group, the leading international maritime design, engineering and risk management consultancy, has announced the promotion of Catriona Savage to the role of head of naval architecture.

Catriona joined BMT Defence Services in 1996 and has been integral to the development, team management and maintenance of the company’s structures skill-set for both surface ships and submarines.

During her time with BMT, Catriona has developed specialist knowledge in structural analysis (including finite element analysis), ship structural design to Lloyd’s Rules and Regulations for the Classification of Naval Ships and Submarine Structures. She has also worked on and led projects involving both through-life support of existing vessels and the design of future platforms.

Catriona’s experience has also been broadened by periods of secondment to the UK MoD, the Aircraft Carrier Alliance and the Submarine Support Management Group.

A Chartered Engineer (CEng) and a member of the Royal Institution of Naval Architects (RINA), Catriona has been awarded a BEng in Ship Science and an MSc in Maritime Engineering Science, both from the University of Southampton. She has authored technical papers, which have been published in the Journal of Naval Engineering and at the RINA Warship Conference.

"The appointment demonstrates BMT’s commitment to women in science and engineering, and to ensuring a pipeline of engineering talent proficient in science, technology, engineering and mathematics (STEM) subjects."