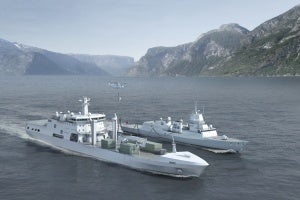 BMT Defence Services, a subsidiary of BMT Group, has announced that it has been confirmed as design contractor for the Norwegian Defence Logistics Organisation’s (NDLO) logistics and support vessel (LSV), supported by sister companies BMT Reliability Consultants and BMT Isis. The new logistic support vessel will be built by Daewoo Shipbuilding and Marine Engineering (DSME).

The LSV contract is worth an estimated £140m, with a proportion going to the three BMT Group defence subsidiaries who will work together with DSME to deliver the vessel. The auxiliary vessel, designed to cover a multitude of roles and to be built by DSME in their Okpo yard, will measure 180m in length, 26m in beam, and have a displacement of over 26,000t. This new addition to the fleet is due to be delivered to the Royal Norwegian Navy during October 2016.

The LSV project will benefit from leveraging the economic efficiencies of the world’s premier shipbuilder combined with the UK’s pre-eminent capability in naval ship design and engineering. It will strengthen DSME and BMT’s synergistic relationship since a derivative of Bath-based BMT Defence Services’ AEGIR® replenishment vessel design was selected for the UK MARS (Military Afloat Reach and Sustainability) tanker programme in 2012.

Between the three companies, BMT will provide the programme with, amongst other services, basic design, requirements analysis and acceptance planning, integrated logistics support (ILS), the management, assessment and optimisation of the supportability, availability and reliability as well as safety and environmental analysis and management.

David Bright, defence sector director of BMT Group said: "We are delighted to have secured this prestigious contract in the face of strong international competition. BMT’s on-going partnership with DSME has yet again borne fruit and it will be a privilege to continue working with such a reputable, world-leading shipbuilder. Delivering the Norwegian LSV in partnership with DSME will undoubtedly challenge our staff to demonstrate the full extent of their design and engineering expertise."

He continued: "The contract award demonstrates our continued export success and further reinforces BMT Defence Services’ recent Queen’s Award for Enterprise in the field of international trade. The award of MARS and now LSV demonstrates BMT’s capability to work on high profile, complex, international procurement projects, and that our AEGIR design is evidently an excellent platform that can be tailored to each individual customers’ bespoke requirements."