Wärtsilä ELAC Nautik GmbH is a company at Kiel, with more than 80 years of experience in development and production of hydroacoustic systems. 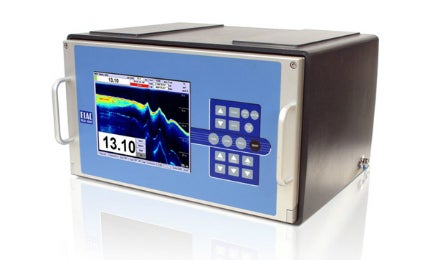 Wärtsilä ELAC Nautik GmbH is a company at Kiel, with more than 80 years of experience in development and production of hydroacoustic systems.

The firm’s product portfolio includes sonar systems, echo sounders, as well as systems for underwater communication and data link units for military and civil application. All products are manufactured and sold at the Kiel facility.

Wärtsilä ELAC Nautik further offers installation and service of the products and customer support by training and logistic. Its products and systems are known for their reliability and advanced technique. The company is certified according to DIN EN ISO 9001.

Wärtsilä ELAC Nautik is specialised in customer-specific sonar development and offers a wide application range from mine avoidance and navigation support to location of submarines in distress, navigation and detection and more.
The passive sonar system LOPAS is the most compact and versatile unit available worldwide.
The naval echo sounder VE 5900 is a compact modular system with one to four frequencies for surface vessels or submarines.
Wärtsilä ELAC Nautik offers approximately 50 different sonar components, including nearly the complete range of outboard sensor technology for submarines such as hydrophones or transducers for active-, passive-, intercept- and flank array sonars as well as transducers for active sonars onboard of frigates.

Marine vessels are exposed to numerous threats from underwater, for instance mines, divers with transfer vessels and submarines. The frequency of an anti-submarine warfare (ASW) sonar is too low for detection of small objects, whereas the range of a mine hunting sonar is too small.

Wärtsilä ELAC Nautik closes this security gap with the compact sonar VANGUARD, combining a forward-looking high-resolution 3D navigation sensor with a system for 360° surveillance, protecting the vessel during its journey as well as while anchoring.

VANGUARD is operated by an intuitive graphic interface. Even untrained personnel will be able to operate the system effectively and securely after a very short time.

Mine avoidance sonar for support in dangerous waters

SCOUT is based on the same concept as the VANGUARD sonar family. The main purpose of the sonar is mine avoidance and navigation support in dangerous waters.

The high-efficiency of the system is completed by additional features, such as charting of the sea floor and supervision of the surface (for instance shortly before surfacing).

SCOUT can also be refitted on existing submarines. Wärtsilä ELAC Nautik offers a wide range of arrays, allowing for installation in all kinds of submarines.

Wärtsilä ELAC Nautik’s passive sonar system LOPAS is compact and versatile. The basic version of LOPAS can replace an old sonar, which cannot be maintained any further without considerable costs. In addition LOPAS is the basis for a full sonar suite, including intercept-, active and passive ranging-, mine avoidance- and flank array sonar.

A submarine in distress must be located as fast as possible, to allow a rescue team to save the crew quickly. The pinger location system LOPAS either detects emergency signals, for instance sent by the sonar beacon system, -or performs a long-range active search for a submarine in distress.

PILOS is installed on the mother ship. Its compactness and modularity allow installation on virtually any type of vessel, new or overhauled. Apart from the actual rescue mission, PILOS also detects objects, which may for instance have become lost during manoeuvres.

If a submarine is in distress and the crew cannot save themselves on their own, it is mandatory to locate the submarine as fast as possible. For this purpose Wärtsilä ELAC Nautik’s sonar beacon system sends an acoustic emergency signal for quick and exact location of the submarine.

The system is available as single or dual frequency unit, for either long-range or both short- and long-range. The signal can be released manually or automatically by contact with water and fully complies with STANAG 1298.

The portable active / passive diver sonar DSE 1 enables divers to detect mines and other obstacles in coastal waters, rivers or lakes. In contrary to other systems in the market, the DSE 1 fulfills the requirements of STANAG 2897 class 2.

The DSE 1 is a multibeam system. Its display provides data about bearing, distance and target size and its passive mode allows detection of sound sources to support recovery of pingers or to assist during rescue operations.

The naval echo sounder VE 5900 is a compact modular system with one to four frequencies for surface vessels or submarines. Control and display elements are combined in a single unit, built to military standards.

The system can be installed in a 19in rack or can be delivered as stand-alone unit in a shock-proof housing. Depth data are displayed as echogram and as numerical value on a high-resolution monitor and are stored for a period of at least seven days.

The UT 3000 is the first underwater communication system combining analogue and digital communication in one unit. In addition to the telephony and telegraphy mode, the UT 3000 offers unique features such as own noise measurement, horizontal distance measurement and transmission of SOS signals.

The new digital mode allows for fast and reliable transmission of digital data in water.

Standardized or modified interfaces support the integration into the communication network of the vessel. The system is available for surface vessels and submarines.

The UT 2000 is a compact underwater telephone according to military standard. It is in particular installed as an emergency phone in case that the submarine’s electrical system fails.

Wärtsilä ELAC Nautik offers approximately 50 different sonar components, including nearly the complete range of outboard sensor technology for submarines such as hydrophones or transducers for active-, passive-, intercept- and flank array sonars, as well as transducers for active sonars onboard of frigates.

More than 2000 transducers and hydrophones are produced per year, all of them are tested electrically and acoustically before delivery. All transducers fulfill military or civil standards, such as for instance IMO or Coast Guard requirements, MIL-Specs and DEF-STAN.

In addition to the company’s own transducer range, transducers of all kinds can be reproducRedesign and replica of transducersed. Hydroacoustic systems, for which spare parts are no longer available, can thus be kept operational. State-of-the art material and components guarantee highest performance and reliability, supply shortfalls can thus be avoided.

The LAZ 5100 is the latest navigation echo sounder, which allows a reliable detection of the sea bottom in shallow as well as in deep water. It fulfills the requirements of IMO for navigation equipment and is type-approved by BSH, USCG and CCS.

Systems for Submarines and Surface Vessels

L-3 ELAC Nautik has supplied equipment and systems for submarines and surface vessels to more than 40 navies worldwide. We combine decades of experience with innovative solutions in order to develop capable and cost-effective systems.

It has been announced that Wärtsilä Corporation's acquisition of Germany based L-3 Marine Systems International (MSI) has been finalised.

L-3 Nautronix and L-3 ELAC Nautik announced today the use of their maritime systems equipment to provide unprecedented two-way, reliable communications to the deepest point of the ocean to assist James Cameron's Deepsea Challenger submarine.

L-3 ELAC Nautik announced today that its mine avoidance sonar was successfully demonstrated as part of the Mine Avoidance Intercept and Analysis (MANTA) system for the WALRUS class submarine of the Royal Netherlands Navy.

L-3 ELAC Nautik and Transas Russian Fleet Ltd. have signed a contract for the delivery and installation of a multibeam system SeaBeam 3020 in December 2009. The deepwater system will be installed in a new icebreaking research vessel presently under construction at the Admiralty Shipyard

L-3 ELAC Nautik announced today that it has been awarded a $26 million contract to upgrade the Walrus-class fleet of submarines for the Royal Netherlands Navy. This modernization effort is the first step in a significant sonar update of the Walrus class aimed at keeping the submarines in worldwid

The U212 submarine is capable of long-distance submerged passage to the area of operation. The German Navy ordered four of the submarines.

The MEKO A combat ships, designed by Blohm and Voss, evolved from the MEKO family of ships, which have been in operation with navies around the world since the 1980s.

Inspector Mk2 mine countermeasures unmanned surface vehicle (USV) variant is based on a multi-purpose drone platform produced by ECA Group.

Italy and France each ordered two Horizon Class anti-air warfare (AAW) frigates in October 2000. The frigates are being

In January 2004, the United Arab Emirates' Ministry of Defence in Abu Dhabi awarded a contract to Abu Dhabi Shipbuilding

The five Nansen Class anti-submarine warfare frigates were built by Navantia of Spain for the Norwegian Navy. The vessel

The S-70B Seahawk naval helicopter is manufactured by Sikorsky Aircraft in Stratford, Connecticut.

The Sachsen Class (F124) is Germany's air defence frigate built by ARGE F124, a consortium consisting of Blohm + Voss as

The Kapal DiRaja Lekiu and Kapal DiRaja Jebat frigates were commissioned into the Royal Malaysian Navy in March and May 1999.

The F100 is a 5,800t multipurpose frigate built by the Spanish shipbuilder, Izar (formerly E.N. Bazan). In February 2005

Six Segura class minehunters have been built for the Spanish Navy by the Spanish shipbuilders Navantia (formerly Bazan,

Schelde Shipbuilding of the Royal Schelde Company, based in Vlissingen in the Netherlands, has built the Rotterdam Class landing platform dock (LPD) ship.

The Type 123 Brandenburg Class frigates were ordered in June 1989 to replace the Hamburg Class. The frigates are primari

The Huon design is based on the Italian Gaeta/Lerici Class. Six minehunters have been built by ADI in Newcastle, Austral

The German Navy has eight Bremen Class frigates designed and built by Bremer Vulkan in the 1980s. The ship's primary rol

The flagship of the Italian Navy is the aircraft carrier MM Garibaldi, built by Fincantieri of Genoa and commissioned in

On 22 November 2000, a contract was drawn up between Fincantieri and the Italian Ministry of Naval Defence to supply an

The Brazilian Navy's submarine force is based at Base Almirante Castro e Silva, Mocangue Island, which is near Niteroi,

The Agosta submarines designed by DCN (now DCNS) of France, are currently in service with the French, Spanish and Pakist

The Sea King helicopter is manufactured by AgustaWestland in the UK. Development started in the late 1950s under licence