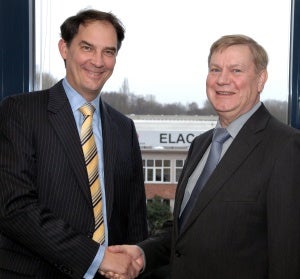 "We are delighted to welcome Dr Brechtefeld as general manager of L-3 ELAC Nautik GmbH," said
Ulrich Weinreuter, president of L-3’s Marine Systems Sector. "His broad experience in the defence industry will enable ELAC to further expand the leading market position Gerhard Jordt created for the company in the area of underwater acoustics."

Dr Jörg Brechtefeld said: "It is an honor and great privilege to be appointed general manager of L-3 ELAC Nautik. I will build upon the successful foundation Gerhard Jordt established and ensure that ELAC remains a leading provider of underwater acoustics in the competitive worldwide naval market."

With almost 30 years of experience in the naval sector, Dr Brechtefeld has significant expertise in the maritime market. Before joining ELAC Nautik in 2011, Dr Brechtefeld was the head of naval affairs for Diehl Defence Holding. From 2002 to 2004, he was head of sales and marketing and a member of the board at T-Systems in Hamburg and vice president of international defence for T-Systems Enterprise Services until 2008.

Dr Brechtefeld served in the German Navy from 1982 to 1986 with his last position as commander. He received a master’s degree from Pennsylvania State University in German literature and political science.

After a teaching assistantship at Pennsylvania State University, he received his PhD in political science. Dr Brechtefeld was an assistant professor of political science at the Christian-Albrechts-Universität zu Kiel (CAU) and also held several professional positions within the German defence industry.

It has been announced that Wärtsilä Corporation's acquisition of Germany based L-3 Marine Systems International...

Systems for Submarines and Surface Vessels

L-3 ELAC Nautik has supplied equipment and systems for submarines and surface vessels to more...

L-3 Nautronix and L-3 ELAC Nautik announced today the use of their maritime systems equipment...