The current climate of terrorism and Iran’s continued persistence with a nuclear enrichment programme has, quite rightly, left the US on edge. Efforts to improve homeland security have increased exponentially, with protection against the particular threat of biohazard or nuclear attacks attracting particular interest.

While ballistic missile defence systems are capable of protecting the nation from an explicit attack, they cannot prevent the detonation of a weapon smuggled into the country.

Having cited the need for technology capable of "tracking, detecting, determining intent, intercepting, identifying, engaging and neutralizing weapons of mass destruction in the maritime domain," the US Office of Naval Research (ONR) has been investigating technology that could be capable of just that.

Collaborating with the Defense Threat Agency, ONR’s Maritime Weapons of Mass Destruction Detection Programme has been exploring ways in which naval vessels could detect nuclear materials in an operational mode, while also conducting interdiction or surveillance missions.

The programme itself has been tasked with providing solutions to ensure that vessels transporting shipments from outside the US can be scanned without the need to be boarded, a method which is not only time consuming but potentially dangerous.

Above the water line detection 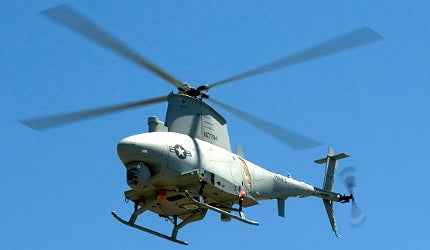 MQ-8B Fire Scouts could be fitted with radiological detectors. Image courtesy of Jrfreeland

"ONR will oversee the development of multimode sensing systems, as well as variable geometry active interrogators and airborne sensors."

The Office of Naval Research has identified detection schemes to function both above and below the water line, comprising of a comprehensive detection strategy. Above the water line, sensors capable of detecting nuclear materials will be installed upon both naval vessels and UAVs, with significant improvements to the range of detection technology being highlighted as a key technological advancement.

Ranges had previously been limited by low-purity detectors working in high-clutter environments; however the development of higher purity detectors, coupled with innovative sensors based on electronic micro-electro-mechanical systems (MEMS), could extend current detection ranges.

ONR will also oversee the development of multimode sensing systems, as well as variable geometry active interrogators and airborne sensors which are to be incorporated onboard naval-launched UAVs, with an ONR release highlighting the MQ-8B Fire Scout vehicles flown from the US Navy‘s fleet of Littoral Combat Ships as being a potential option.

The collaboration effort has been ongoing since 2009, with ongoing development work on specific long range detectors culminating in large-scale shipboard experiments within 2012. The development of such technology could be furthered by ongoing work conducted by the US Naval Research Laboratory (NRL), furthering the development of novel radiation detectors.

The NRL’s Space Science Division is in the process of developing novel radiation detectors, based upon hole or trench-arrays in semiconductors, which are desirable as they allow lateral depletion and charge collection, which in turn can result in detection devices which are not only smaller in size and lower in weight, but more energy efficient than current state-of-the-art detection devices.

The development of smaller and lighter devices is likely to peak the interest of those working on the development of below the water line detection methods, with the use of autonomous underwater vehicles highlighted as an area with significant potential.

UUVs delving below the water line 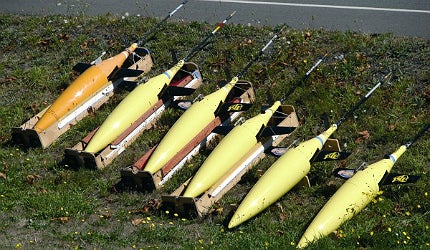 iRobot‘s range of Seaglider UUVs could aid in the search of nuclear material. Image courtesy of iRobot

"Above the water line, sensors capable of detecting nuclear materials will be installed upon both naval vessels and UAVs."

An iRobot 1KA Seaglider was proven to be capable of measuring the temperature, salinity and radiation of water before transmitting the data via global satellite telemetry, allowing an off-site operator to conclude whether or not a vessel is attempting to smuggle nuclear material.

Integrating radiation detection system onboard UUVs isn’t necessarily a new idea, however. Patent documents filed in February 2009 reveal the intentions, stating: "Terrorist groups and rogue nation states have threatened to utilize radiological and nuclear materials as threat weapons against the US and other countries in the world. Storage and transportation of these materials and weapons would likely occur in maritime vessels or seaport facilities that are difficult to access by manned mission. An unmanned underwater vehicle could be covertly sent into such a vessel or facility to conduct radiological field measurement evaluations in the vicinity of the suspect target(s)."

The 2009 patent documents hint at a need for greater development and advancement of technology, stating: "Large radiation detector volumes and corresponding weights are generally required for detector sensitivity, making deployment of conventional detector systems in a UUV unworkable due to size constraints."

Any miniaturisation of proven technology, such as that offered by the laser-micromachining of detector systems, could enable UUVs currently in the US Navy‘s inventory to meet this mission requirement.

"Laser-micromachined hole-arrays can have aspect ratios of up to 100:1, whereas traditional techniques only allow a maximum of 40:1."

The development of such a capability for UUVs would only serve to further their popularity within the world’s navies. In August 2012 the Guardian claimed that the Royal Navy would be strongly boosting its maritime drone capabilities, citing the relatively low cost of operating them in comparison to manned vessels.

The UK‘s Defence Science and Technology Laboratory (Dstl) revealed in papers: "Unmanned systems are being considered as a potential option to aid in the delivery of a range of different maritime tasks given the range of potential threats and increasing demands on the smaller number of highly capable manned platforms in which much of the UK capability is currently focused."

Comprising UUVs in a comprehensive strategy alongside active detection methods such as interrogative beams, and detection technology integrated on UAVs, is a highly promising technique that would not only remove the need of manned boardings, but streamline the laborious process of scanning foreign shipments for nuclear material.

Whether authorities would have the same peace of mind in unmanned systems, given the catastrophic cost of a potential mistake, remains to be seen.

In August 2005, Fire Scout was redesignated from RQ-8 to MQ-8 to reflect its multirole capability, including the ability to deploy weapons.

Airborne above the sea: the world’s most advanced naval UAVs

The importance of intelligence, surveillance and reconnaissance at sea has been underpinned by the growth of naval UAVs.