With the US Navy rushing to equip its Littoral Combat Ships and aircraft carriers with an array of unmanned aerial vehicles, their popularity has been underpinned. The need to cheaply and efficiently fulfil multiple capabilities comprising of intelligence, surveillance and reconnaissance (ISR) missions has led the world’s navies to unmanned options.

Not only can UAVs be operated cheaply in comparison to larger, more demanding manned aircraft, they can also be launched more quickly and from smaller launch areas, such as those found aboard naval vessels. While the ScanEagle has its own launch system, vertical take-off vehicles, like the Picador and Eagle Eye, possess a unique advantage over other vehicles tasked with conducting ISR duties.

With the X-47B and MQ-4C aircraft approaching entry into service, the capabilities of naval unmanned aircraft are about to take another step forward. 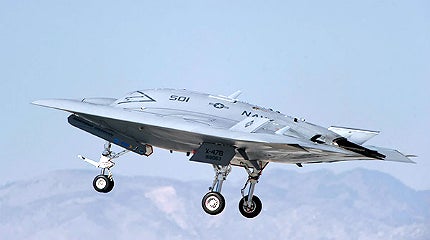 The tailless UCAS is designed to serve naval carriers at sea. Image courtesy of Northrop Grumman.

Currently in development for the US Navy, the X-47B UCAS successfully completed initial test flights at Patuxent River, Maryland, US, in July 2012.

Air worthiness of the demonstrator aircraft was developed at an estimated cost of $813m, and the X-47B is expected to enter active naval service by 2019.

The shape of the X-47B has been designed for stealth and low observable relevant requirements, with the weapons bay capable of a payload of 4,500lbs. The aircraft’s navigation is controlled using a hybrid GPS vision-based system, with flight paths pre-programmed and operations monitored by a mission operator.

Powered by a Pratt & Whitney F100-PW-220U engine, the X-47B is capable of a high subsonic speed of approximately 0.45M and a maximum altitude of 40,000ft, with a range of around 2,100nm. As the aircraft approaches service, carrier launch, recovery and deck handling tests are scheduled to be conducted throughout 2013, with aerial refuelling demonstrations pencilled in to take place during 2014. 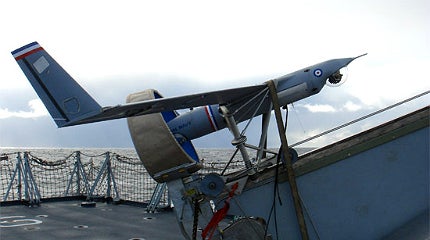 With a range of more than 1,500km and an endurance of more than 28 hours, the ScanEagle can be used for missions including intelligence, surveillance and reconnaissance (ISR); escort operations; sea-lane and convoy protection, as well as high-speed wireless voice, video and data communications relay.

Having been introduced into service in 2005, the ScanEagle is now used by the US Marine Corps, US Navy, US Air Force, US Department of Defence, Australian Army and the UK Ministry of Defence.

The ScanEagle is not fitted with landing gear, but is catapult-launched from a pneumatically operated wedge launcher, propelling the aircraft at a velocity of 25m/s.

When its mission is completed, the ScanEagle uses SkyHook technology for recovery, comprising of an arresting line suspended in the air from a 15.2m boom. A hook installed on the vehicle’s wingtip catches onto the arresting line, suspending the aircraft. 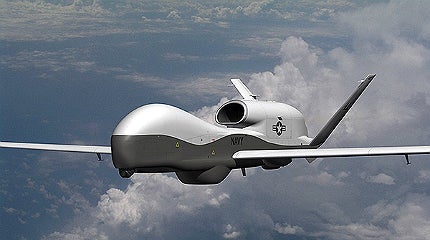 The MQ-4C Triton BAMS UAS is expected to enter service in 2015. Image courtesy of Northrop Grumman.

Designed by Northtrop Grumman to complement the US Navy’s Maritime Patrol and Reconnaissance Force, the MQ-4C Triton will make its maiden flight in 2012, with the aim of achieving initial operational capability in December 2015.

"The design of the MQ-4C is based on the maritime variant of the RQ-4B Global Hawk."

Powered by a Rolls-Royce AE3007H turbofan engine, the MQ-4C can operate at a maximum altitude of 60,000ft and a maximum unrefueled range of 9,950nm. Its maximum take-off weight is 14,628kg, while the aircraft’s maximum speed is 357mph. 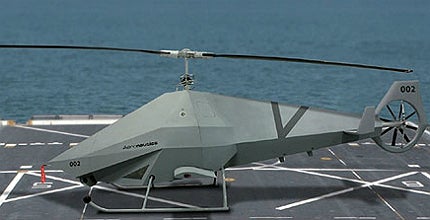 Picador UAV on the deck of a naval ship

The Picador vertical take-off and landing (VTOL) UAV has been designed and manufactured for the Israel Defence Forces by Aeronautics Defence Systems (ADS).

Capable of performing intelligence, surveillance, target acquisition and reconnaissance missions, Picador is based on the two-seat Dynali H2S kit helicopter.

After the Picador’s maiden flight, ADS president Avi Leumi said that the Picador was aimed at navies looking to replace manned helicopters used for intelligence gathering operations, though the helicopter can also be used for civil operations.

The aircraft can be controlled either manually through its ground control station or act autonomously, with its autonomous mission programming system capable of aiding in safe landing in the event of a communication failure. The Picador is equipped with electro-optic and infrared sensors capable of capturing battlefield imagery in order to fulfil mission capabilities. 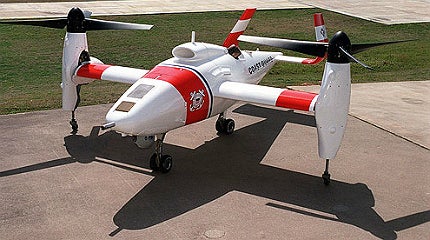 The Bell Eagle Eye is a short-range, shipboard-deployable UAV from Bell Helicopter

"Between take-off and landing the Eagle Eye can cover 800nm and fly at altitudes of up to 20,000ft."

The nacelles rotate 90 degrees forward to convert the aircraft into a turboprop during flight, launching the aircraft at speeds of more than 200kt. Between take-off and landing the Eagle Eye can cover 800nm and fly at altitudes of up to 20,000ft.

Bell developed the Eagle Eye to conduct intelligence, surveillance and reconnaissance missions, in either land-based or sea-based environments, and the aircraft is capable of assisting in border patrol, NBC detection, real-time situational awareness for tactical forces and target identification.

The Eagle Eye can also be used as a guidance system for naval or artillery gunfire, while also being capable of delivering sonobuoys for use in anti-submarine warfare operations.

Although the US Coast Guard has frozen funds earmarked for the development and procurement of the vehicle, the US Navy and Marine Corps, as well as other European navies, have expressed an interest in procuring the Eagle Eye.

Both the US and UK navies will soon be fielding new combat ships to fulfil a variety of operational capabilities. As more Littoral Combat Ships roll off the conveyor belt, the Royal Navy has confirmed its Type 26 design.

Chris Lo explores the US Navy’s plans for a networked system of automated vehicles and sensors which could carry out littoral surveillance with an unblinking eye.

The Bell Eagle Eye is a tiltrotor unmanned aerial vehicle (UAV) developed by Bell Helicopter, a unit of Textron. The Eagle Eye is the most versatile vertical takeoff and landing (VTOL), integrating advanced technology in a reliable platform to demonstrate mission effectiveness.

Defense and Civil Spends on Helicopters in Asia-Pacific: 2016 to 2024