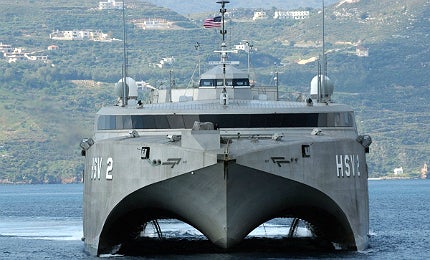 Lockheed Martin and Austal received contracts from the US Navy for the construction of four additional Littoral Combat Ships (LCS), with two of each design further adding to the US Navy’s LCS inventory.

Austal will be supported by General Dynamics Advanced Information Systems in the design, integration and testing of the ship’s electronic systems for combat, networks and seaframe control, with work under the contract due to be completed by June 2018.

Lockheed is expected to deliver the vessels it is responsible for one month later.

Babcock integrated the Forward Island for the UK Royal Navy’s new Queen Elizabeth-Class aircraft carrier at its Rosyth shipyard in Scotland, marking a key milestone in the vessel’s assembly programme.

Constructed by Bae Systems, the Forward Island is a crucial component of the carrier, comprising of the main bridge and around 100 vital mission system compartments.

HMS Queen Elizabeth also features an Aft Island, which will provide independent control of navigation and air traffic control operators for the Royal Navy and be lifted into position by the end of July 2013.

HMS Queen Elizabeth is expected to undergo sea trials in 2014 following completion of its construction phase at the end of 2013.

The Iranian Navy launched its domestically built Mowj-Class guided missile destroyer, also known as the Jamaran 2, in an official ceremony in the Caspian Sea.

Fars News Agency alleged the new destroyer will feature advanced navigation systems and domestically-manufactured defence equipment, with the original Jamaran vessel having been launched in February 2010.

Designed with a helipad for carrying helicopters, and fitted with modern radars and electronic warfare capabilities, Jamaran is a multipurpose destroyer that combines anti-submarine capabilities with defence systems to engage in surface, air and undersea warfare.

Armed with a variety of anti-ship, surface-to-surface and surface-to-air missiles, as well as torpedoes, a smart ‘Nour’ (light) missile and modern naval cannons, the 94m-long Jamaran has a displacement capacity of 14,000t.

The destroyer had completed trials of its upper deck gunnery systems earlier in the month, which involved a test firing of its 4.5in Kryten main gun, 30mm cannon, miniguns and validated their capabilities.

Launched in 2010, HMS Duncan was initially scheduled to depart last week, but was delayed due to technical problems.

During the trials, the system floated in the water to gather acoustic data, which will be used to enhance the software and enable the alert system to be more reliable when deployed in future.

The TWS/CAT is scheduled to undergo testing over the next few months aboard CVN 77, providing an opportunity for sailors to familiarise themselves with the system.

Forecast spending for 2012 has been lowered as government officials confirm the UK will pull out of Afghanistan by 2014.Russia’s first Borey-Class ballistic missile nuclear submarine, Yury Dolgoruky, entered operational service, while Asia-Pacific territorial disputes continued to escalate, with China boosting its naval capabilities in the region.