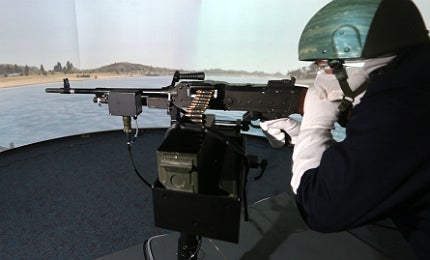 When accuracy is king, first-hand experience of handling a weapon is pivotal and live-fire exercises are the tried and trusted method of affording soldiers such knowledge.

However, with an increasing amount of military training conducted virtually, be it using simulators or desktop computers, the UK’s Defence Science and Technology Laboratory (Dtsl) identified the need for a new, indoor-based system to test and enhance maritime marksmanship.

As NSC project manager David Bailey explains: "Dstl required a virtual simulator to try out techniques and enable them to compare training methods."

NSC’s Immersive Gunner Environment promises to fulfil that requirement, placing a deactivated gun in the soldier’s hands and objectives to fulfil on a 180-degree screen. "It uses a real, deactivated gun, where you pull the trigger and cock it in the same way you would an active weapon," Bailey adds.

"Dstl required a virtual simulator to try out techniques and enable them to compare training methods."

Realism isn’t capped at the use of an authentic gun, either. "An air compression system then provides feedback when the trigger is pulled, so you have realistic recoil too – this is all physically happening as you aim and pull the trigger in the exact same way," confirms Bailey.

Simulations are then played on the screen, with the participating soldier called to provide firing assistance throughout scenarios. The gun recognises when it is being fired and the direction of any shots, relaying the information to the simulation, resulting in a highly immersive training programme for the maritime environment.

But what differs between the maritime environment and simulations on ground or in the air?

Aside from the obvious, one of the key limitations, as Bailey explains, relates to the movement of the gun itself. "One of the key differences is that the gun is operated on a ship, so the firing arc is restricted to 180 degrees and the curved 180 degree screen facilitates that."

The use of simulation technology to train military personnel is undoubtedly growing alongside simulator capabilities. Air force pilots have long since trained in simulators due to the inherent danger of jumping behind the controls of a gravity-defying machine unqualified, but now both the army and navy seem keen to follow in those footsteps.

"The use of simulation technology to train military personnel is undoubtedly growing alongside simulator capabilities."

The call cited areas such as cyber awareness education, the use of narrative and game-play and the use of real-world data feeds as specific areas of interest, highlighting a need to adequately replicate scenarios that military personnel are likely to encounter.

One such example of this is the use of an immersive simulator at HMS Collingwood in Fareham to train crew of the Royal Navy’s future aircraft carrier HMS Queen Elizabeth before she’s even fully constructed. By doing so, sailors are expected to be well versed in the mammoth task of manoeuvring such a large vessel by the time she sets sail.

Immersive, but not immobile

With a range of simulators emerging, what sets NSC’s Immersive Gunner Environment apart? "What’s novel about the system is it’s mobile, it can be put up by a team of three to four people in a day. Also, logistically, it can fit into a regular office with a 2 – 2.5 metre ceiling. It’s not like other systems needing a hangar; all it requires is a three metre circle of open area," explains Bailey.

"What’s novel about the system is it’s mobile, it can be put up by a team of three to four people in a day."

Bailey adds: "The system is visually very impressive. There is a need to immerse users, if users don’t really get into it then there can be issues, but the level of immersion on offer really draws users into the experience," acknowledging that the system has been well received by Dtsl to date.

"The trial is in early days, but the initial reaction seems to be that the training methods are having an impact. This suggests that the system is able to display a difference in the way people train."

The combination of an immersive simulation and a realistic weapon that is operated in the exact same way it would during regular service and reacts the same way when fired is evidently obtaining results, so is the system being lined up for other applications? Bailey seems positive, confirming: "There’s no reason why it couldn’t be used on other training regimes, we’re also experimenting with using the system for training of door gunners for Chinook helicopters."

With armed forces tasked with familiarising themselves with an ever-expanding array of kit, it comes as little surprise that simulation training that can be conducted in-base, rather than during costly and time consuming exercises conducted on the other side of the world, is growing in popularity.

Keeping soldiers immersed in the environment may remain a challenge, but utilising realistic weaponry is evidently one such means of doing so. Traditionalists may iterate concern that today’s soldiers are too mollycoddled and, as a result, unfamiliar with the harsher realities of battlefield conditions, but the benefits of such simulation exercises are too abundant to be ignored.

As disputes rumble on about the UK defence budget and whether the Ministry of Defence was right to switch F-35 variants, BAE Systems has risen above it all to continue construction on the Royal Navy’s new aircraft carriers.

Navy Expenditure in the Sri Lanka to 2020: Market Brief