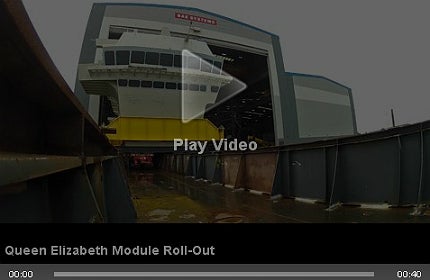 Preparing a 680 tonne section of the first of a new generation of aircraft carriers for a 600 mile, four day journey by sea is no mean feat. Bae Systems has rightly boasted of its achievement by releasing this timelapse video, showing its journey from dock hall to harbour, and even inviting maritime fans to follow its progress on Twitter.

Just 70 weeks after the first steel was cut, the Forward Island section, also less romantically known as Upper Block 07, has left the Portsmouth dock hall basin and travelled through a lock ready for departure.

It will be transported to Rosyth aboard a barge by a specialist transportation team from the Aircraft Carrier Alliance, with a 78 tonne lifting frame attached to allow the Goliath Crane in Rosyth to lift it onto HMS Queen Elizabeth in March. Once in place and with the Long Range Radar installed, the ship will stand at its full height of 56 metres, even taller than the Niagara Falls.

Paul Bowsher, QE Class project leader for BAE Systems in Portsmouth, said: "The Forward Island is a key part of the Queen Elizabeth aircraft carrier and once again the exceptional standard of construction that we have achieved is true testament to the skills and talents of our team. "

"It is a very proud moment to see her leave the hall, but we are already looking forward to her return home to Portsmouth as part of the largest warship ever constructed for the Royal Navy."

Though a much larger section has already made the same journey – a 6,000 tonne section of hull travelled along the same route last May – this Forward Island section perhaps best defines the essence of the ship. Very much its hub, it contains the main bridge and approximately 100 vital mission systems compartments.

"The aircraft carriers have been the focus of recent debate about British defence spending."

The bridge has floor-to-ceiling windows, which are up to two metres tall in places, offering an unprecedented field of view. The first aircraft carrier to feature a two-island design, HMS Queen Elizabeth will also feature a second Aft Island, which will operate as an airport control tower to co-ordinate aircraft movements.

The 65,000 tonne Queen Elizabeth Class aircraft carrier is expected to enter service in 2016, followed by its sister ship HMS Prince of Wales in 2018. Once commissioned, they will be based in Portsmouth.

The aircraft carriers have been the focus of recent debate about British defence spending, mainly around a governmental flip-flop in deciding which variant of the F-35 to fly from them. The MoD recently settled on the jump-jet F-35 B short-take off and vertical-landing (STOVL) variant after the cost of fitting catapults and arrestor gear – "cats and traps" – to the ships spiralled. However, the decision to continue construction of both ships has been a huge boon to the local economy and employment in Portsmouth and Rosyth.

The Electronic Warfare Market in Saudi Arabia to 2025: Market Brief

The Electronic Warfare Market in Saudi Arabia to 2024: Market Brief

The Missiles and Missile Defense Systems Market in the United Kingdom to 2025: Market Brief

The Military GPS/GNSS Market in the United Kingdom to 2023: Market Brief