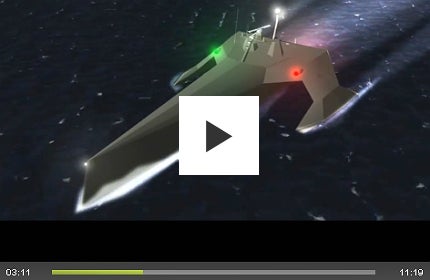 SAIC‘s solution for the Anti-Submarine Warfare (Asw) Continuous Trail Unmanned Vessel (ACTUV) programme is an autonomous trimaran unmanned surface vessel (USV) that can scan the oceans for enemy submarines during missions that can last up to 90 days, detecting even diesel-electric boats which are near-silent when moving slowly.

Requiring little human interaction, ACTUV can be remotely piloted when required for actions such as leaving a harbour. Otherwise a single operator, who can control several ACTUVs, would monitor activity from a communications centre and issue infrequent commands based on the information ACTUV transmits.

"Requiring little human interaction, ACTUV can be remotely piloted when required for actions such as leaving a harbour."

The on-board autonomy framework provides instantaneous transition from remote control to autonomous control and back again as required, while monitoring its surroundings and responding to mission instructions and priorities.

At sea, ACTUV shifts to fully-autonomous operation and engages its full suite of instrumentation and sensors to keep track of everything around it. Using collected data and sophisticated algorithms, ACTUV can track and classify other vessels and objects, infer the intent of any craft it tracks and evaluate and adjust quickly to developing circumstances. It carries out periodic low-bandwidth reporting of health and equipment status and the status of any contacts of interest to the command post.

Arriving at a target location, the ACTUV automatically adjusts its mission plan based on the current weather, geographical factors and external updates from the US Navy’s Joint Task Force Commander’s Navy Theatres and Strike Groups ASW architecture.

The potential sensor suite for ACTUV could include electro-optics, long-range and short-range radar, and LIDAR, which together would enable it to detect, localise, track and classify a target in all weather and visibility conditions up to sea state five (rough). ACTUV is survivable in conditions up to sea state seven, though some mission capabilities may be degraded.

Detecting and classifying a target

The ACTUV lingers in its loiter box until it receives tracking and signalling data from the ASW commander directing it to engage a target enemy submarine.

"ACTUV can track and classify other vessels and objects, infer the intent of any craft it tracks and evaluate and adjust."

As it approaches, it uses long-range mid-frequency active-passive sonar to determine the approximate location of the target. It then uses high-frequency sonars with overlapping coverage to maximise tracking precision, and a towed field magnetometer array to provide additional information about target activity.

As the target submarine moves, the ACTUV establishes a close-in track and matches its trajectory, using a very high-frequency sonar to make an acoustic image of the target to classify it, passing this information to the ASW commander. The commander can then decide whether to order the ASW group to engage the target, or keep the ACTUV following in the hope that the submarine captain will realise that it cannot shake it off and return, demoralised, to port.

At the end of its mission, ACTUV returns to its home harbour, self-reporting its condition en route so minimal preventative maintenance can be carried out.

The Submarine Market in Argentina to 2024: Market Brief

The Submarine Market in India to 2024: Market Brief

Never Trust, Always Verify - Is Zero Trust the Next Big Thing in Cybersecurity?