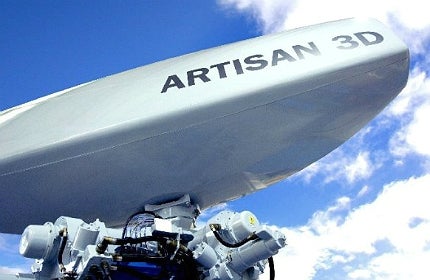 In 2012, radar contracts in the US alone increased by nearly $1bn compared with the previous year – rising to $4.26bn – according to figures from Frost & Sullivan, largely driven by the growing requirements for missile defence and counter battery systems. That same picture is broadly reflected globally, particularly as technology developments in Active Electronically Scanned Array (AESA) and Phased Array systems drive demand in nations embarking either on new procurement rounds or programmes to upgrade and refurbish existing capabilities.

The traditional role of radar in detecting high-speed incoming missiles and enemy fighters remains, but there are new trends emerging too, to meet changing operational requirements and the new classes of threats appearing by land, sea and air. The continuing need for ever-better situational awareness, for example, is driving improved Intelligence, Surveillance, and Reconnaissance (ISR) systems, and thus a growing range of new radar payloads for satellites and unmanned aerial vehicles (UAVs).

At the same time, the lessons of irregular and asymmetric conflict have led to increasing calls for systems capable of tracking smaller, slower and more obscure targets, such as individuals on foot, or small vessels in cluttered littoral waters.

Cutting through the clutter

"In 2012, radar contracts in the US alone increased by nearly $1bn compared with the previous year – rising to $4.26bn."

Capable of detecting objects the size of a tennis ball, travelling at three times the speed of sound, and at a range of more than 25km, Bae Systems’ ARTISAN represents a major leap forward in meeting the operational challenges facing modern warships, especially in busy coastal areas. Described as the "most sophisticated medium range radar across all radar technology", this system can cut through electronic noise, interference and competing signals to detect and track more than 800 vessels and other objects – both large and small – simultaneously, at distances ranging from 200 to 200,000 metres.

"In terms of detection performance, performance in clutter, tracking accuracies and other measures, it is a class leader. It provides surveillance and target tracking, has an air traffic control mode, provides back up navigation capability and has a co-mounted IFF," says Les Gregory, product and training services director at BAE Systems Maritime Services.

Developed with the assistance of QinetiQ and Roke Manor Research, ARTISAN was installed on HMS Iron Duke as part of a five-yearly refit in March. This is the first of the Royal Navy’s Type 23 frigates to receive the new radar, which is already in service with the Albion and Ocean-Class Assault Ships. It will also be used for the new Queen Elizabeth Class Aircraft Carriers, and has been proposed for the new Type 26 frigates, scheduled to enter service after 2020.

For ground forces, as recent conflicts in Iraq and Afghanistan have shown, the ubiquitous RPG represents a significant threat to personnel and bases. The flatter, lower trajectory of rockets compared with conventional mortar fire, coupled with their high velocity across the relatively short distances of use typically involved, tends to make detection difficult – which all adds up to very little warning time for troops.

Fortunately, solutions are on hand; by the end of 2014 for instance, Lockheed Martin will have supplied the US Army with a total of 33 AN/TPQ-53 (Q-53) counter-fire target acquisition radars, while QinetiQ recently announced Alarm – its fully automatic, purpose-designed unmanned system.

A "world first" according to QinetiQ’s Dr Jeremy Ward, it boasts high detection reliability, a very low incidence of false-alarms and rapid in-field set-up. Having been tested extensively against several hundred short range rockets, its capabilities have been further extended to cover other weapons too, and the units are now in high rate production, with significantly fewer casualties anticipated as its use becomes more widespread.

Commonly on the receiving end of this kind of threat, the US Marine Corps has embarked on finding its own solution, as part of an integrated, mobile system known as the Ground/Air Task Oriented Radar (G/ATOR), which will address the rocket danger, and much more besides.

The Ground Weapons Locating Radar (GWLR) element of the project is intended to locate hostile positions quickly enough for fire to be returned before the incoming rounds hit, while the full system will ultimately allow Marines to detect, track and engage a range of airborne threats, as well as providing front-line air traffic control. Currently being developed by Northrop Grumman, once delivered, G/ATOR will represent a major new capability in support of US expeditionary operations.

Drones and due regard

"Once delivered, G/ATOR will represent a major new capability in support of US expeditionary operations."

Afghanistan has also firmly established the place of the drone, and with many countries around the world investing heavily in UAVs to meet their surveillance and operational needs, the trends in radar development have seen improvements in both navigational and information gathering applications.

As the use of these remotely piloted aircraft grows, both in terms of raw numbers and new uses, sense-and-avoid technologies in particular seem set to play an increasing role in the expanding mission portfolio, and unsurprisingly they form the focus of much research.

In February, for instance, General Atomics Aeronautical Systems – the company behind the Predator / Reaper UAVs in service with many air forces – announced the successful test of their prototype Due Regard Radar (DDR) system, aboard one of their Predator-Bs.

Designed to demonstrate the AESA-based radar’s ability to detect and track intruder aircraft, it also confirmed its ease of integration onto the UAV, with the DDR system simultaneously detecting and tracking a non-cooperative ‘intruder’ aircraft, as well as a number of other aircraft in the surrounding airspace. Although it is still early days, it represents another milestone on the route towards a time when semi or even fully autonomous operation may finally become a realistic possibility.

Recent activity in the sector has led some to speculate that radar technology might be the best growth area in defence electronics for a while to come – and perhaps provide openings for unconventional developments too. With researchers at University College London coming up with a way to use the frequency-shift of reflected Wi-Fi signals to detect the movement of bodies within a building, and Cassidian honing the idea of harnessing radio and TV broadcasts to provide invisible, passive radar detection, it is clear that radar scientists are nothing if not an ingenious bunch.

The US Navy wants its divers to operate at unprecedented ocean depths in a lightweight, agile, swimmable diving suit without resorting to lengthy decompression procedures.

The Military Radar Market in India to 2024: Market Brief