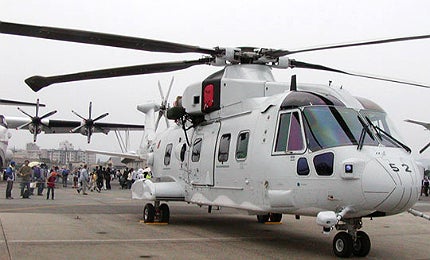 MCH-101 is an Airborne Mine Countermeasures (AMCM) and transport helicopter, operated by the Japan Maritime Self Defence Force (JMSDF). Modified by Kawasaki Heavy Industries (KHI), MCH-101 was derived from the EH-101 medium lift helicopter, manufactured by AgustaWestland. The MCH-101 will replace the fleet of MH-53E that are in service with the JMSDF.

The MCH-101 helicopters are primarily deployed in minesweeping and transport missions. It will also be used to provide transport support for Antarctic exploration. The MCH-101 can be operated from shore as well as from JMSDF ships, such as Hyuga Class helicopter destroyers.

"The MCH-101 helicopters are primarily deployed in minesweeping and transport missions."

KHI was selected as a prime contractor by the Japan Defence Agency (JDA) in 2003 to produce the airframe and engine of EH-101. KHI signed an agreement with AgustaWestland to produce MCH-101 minesweeping helicopters based on the EH-101. KHI was awarded contracts to supply a total of 14 helicopters for the JMSDF.

The first MCH-101 AMCM helicopter was assembled by AgustaWestland. The helicopter made its first flight in February 2005. It was delivered to the JDA in March 2006. The second MCH-101 helicopter, built by Kawasaki under license, was handed over to the JMSDF in March 2007.

In June 2009, AgustaWestland signed a contract with Marubeni Aerospace to establish a new spare parts depot to support the MCH-101 and CH-101 helicopters of the JMSDF.

Based on the EH-101, the MCH-101 helicopter was designed to meet the minesweeping requirements of the JMSDF. The modular airframe of the MCH-101 is made of aluminium alloy and composite materials. The spacious cabin provides an enhanced transport capacity for increased operational efficiency. It allows the integration of crash-worthy seats for accommodating up to 36 troops. The rear ramp opening ensures the loading of cargo and passengers.

"Based on the EH-101, the MCH-101 helicopter was designed to meet the minesweeping requirements of the JMSDF."

The power plant with three engines drives the high-performance five-bladed main rotor. The rotor blades and tail section can be folded for convenient stowage on the warships. The helicopter is also equipped with an active anti-vibration system. The helicopter features superior flying characteristics, while offering higher safety levels.

Countermeasures of the Japanese helicopters

The mine countermeasures systems of MCH-101 helicopter are the AN/AQS-24A airborne minehunting system, the AN/AES-1 Airborne Laser Mine Detection System (ALMDS) and the MK 104 acoustic minesweeping device.

In July 2012, Northrop Grumman received a series of follow-on contracts from the JMSDF to supply three more AQS-24A systems. Northrop Grumman was initially contracted to supply the first AQS-24A system in October 2011. The AQS-24A is a high speed mine-hunting system towed from the helicopter. It includes a laser line scanner for discovering underwater mines and other targets of interest.

In November 2012, Science Applications International Corporation (SAIC) was awarded a contract by the JMSDF to deliver the Mine Warfare and Environmental Decision Aids Library (MEDAL) software system. MEDAL is incorporated into the ground support system of MCH-101. It will complement the mission planning, evaluation and command and control of mine countermeasure missions. The MEDAL system also allows the JMSDF to interoperate with the US Navy.

The MCH-101 helicopter is powered by three Rolls-Royce Turbomeca RTM322 turboshaft engines. KHI was granted a licence to assemble, test, repair and overhaul RTM322 engines for the MCH-101 fleet of the JMSDF. The first engine assembled by KHI was delivered to the JMSDF in 2005.

Each RTM322 engine develops a maximum power of 1,566 kW. The engine’s operation is controlled by a Full Authority Digital Engine Control (FADEC) system. The power plant provides a maximum speed of 280km/h.