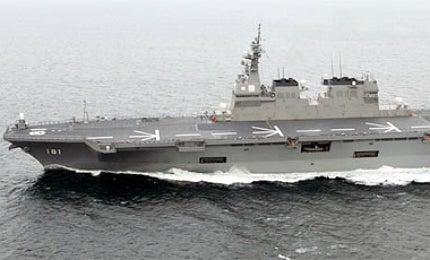 JDS Hyuga is based in Yokosuka, serving as the flagship for the First Escort Flotilla. Among other unique aspects, the DDH181 is the first JMSDF destroyer to have female crew members on board. JDS Ise is homeported at Kure.

The ship is part of the 16DDH project; the name is derived from the 16th year of the Heisei reign in the Japanese calendar. Hyuga was one of the Japanese Imperial Navy’s battleships that were converted into hybrid battleships / aircraft carriers in 1943.

Two additional 19,500t class destroyer (DDH) ships are planned, while the first ship is under construction. These new ships will become the largest combat ships operated by Japan after the end of the Imperial Japanese Navy. The ship’s design bears a resemblance to an aircraft carrier or an amphibious assault ship.

Design of the Japanese vessels

Hyuga is similar in design to a light aircraft carrier. It has a through-deck design to maximise potential space, enabling it to launch and retrieve the helicopter complement. It cannot act as a fixed wing aircraft as it is not fitted with a ski-jump or any other equipment.

The ships use the helicopters on board for their primary mission of conducting anti-submarine activities. Serving as flagships for the JMSDF is on the agenda, command-and-control function is also in place.

Specifications for the helicopter carriers

"These new ships will become the largest combat ships operated by Japan after the end of the Imperial Japanese Navy."

The Hyuga is a 197m-long, 13,950t flat-deck vessel that can carry up to four helicopters on deck and operate 11 SH-60K type helicopters. The ship has a crew of 340 sailors and can only carry helicopters. As Japan was restricted under the pacifist constitution, it cannot possess offensive aircraft carriers.

The helicopter carriers are powered by combined gas turbine and gas (COGAG) propulsion. They are fitted with four General Electric LM2500 gas turbines, developing 25,000hp each. The propulsion system provides a maximum speed of 30kt.

"The ships use the helicopters on board for their primary mission of conducting anti-submarine activities."

The Hyuga has two aircraft lifts, an enclosed hangar and is able to carry up to 11 helicopters. In terms of its size, it is comparable to modern small aircraft carriers, such as Italy’s MM Giuseppe Garibaldi, Spain’s Principe de Asturia and Britain’s Invincible.

Hyuga is one of the largest warships built for the JMSDF and has given Japan its first real power projection capability since 1945.

The vessel could also be instrumental for disaster recovery missions in the region, prone to earthquakes, floods, tsunamis and typhoons. The new vessel was unveiled on 11 April 2009.

Takanami Class destroyers are in service with the Japan Maritime Self Defence Force (JMSDF).