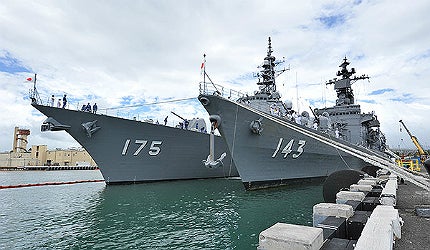 The keel for the lead ship in class, Shirane (DDH 143), was laid down in February 1977. The destroyer was launched in September 1978 and commissioned in March 1980. The second and last ship in class, Kurama (DDH 144), was laid in February 1978 and launched in September 1979. The ship was commissioned into the JMSDF in March 1981. Yokosuka is the homeport for Shirane, whereas Kurama is based in Sasebo.

On 27 October 2009, the Kurama collided with a Korean container ship in the Kanmon Strait near the island of Kyushu during its return to homeport Sasebo after participating in a fleet review at the Yokosuka Naval Base. The collision caused substantial damage to the bow section of the ship.

The Shirane Class incorporates an improved design based on the Haruna Class destroyers. Shirane is slightly larger than its predecessor. It is the first Japanese combat ship to be equipped with a three dimensional radar.

Missiles and guns of the Japanese destroyers

"The Shirane Class incorporates an improved design based on the Haruna Class destroyers."

The Sea Sparrow missile protects the ships from high-speed aircraft and sea-skimming missiles. The missile can carry an annular blast fragmentation warhead for an operational range of 19km.

The close-point defence is provided by two 20-mm Phalanx close-in weapon systems (CIWS). It has a rate of fire of 3,000 to 4,500 rounds a minute. Phalanx can defend incoming anti-ship missiles, helicopters and high-speed surface vessels.

The anti-submarine warfare is supported by ASROCs (Anti-Submarine ROCkets) and torpedoes. The Mk-16 octuple launcher fitted on the vessel can fire RUR-5 ASROC against hostile submarines.

The ship is fitted with Mk 32 triple torpedo tubes for firing Mk-46 lightweight ASW torpedoes. The Mk 46 torpedoes can engage submarines operating within the depth of more than 365m.

Shirane Class has a large helicopter deck at the stern side of the ship for supporting the operations of three SH-60J/K helicopters. The helicopters are equipped to conduct anti-submarine warfare and patrol missions.

The embarked helicopters are stored in a hangar facility located amidships. The vessels feature the Bear Trap haul-down system for landing helicopters in harsh weather conditions.

The ships are fitted with Masker radiated noise reduction system to cut down the underwater noise generated from the main propulsion machinery. The system creates an uninterrupted layer of minute air bubbles on the hull under the machinery places. The layer of bubbles serves as a sound-muting bed.