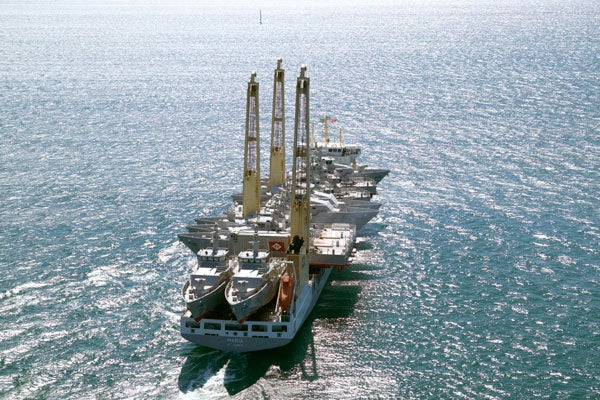 The vessels can be deployed for general police missions in coastal waters, customs control and anti-terrorist operations at sea, offshore protection and tracking, surveillance of the exclusive economic zone, defence and protection of national sea areas, and operations within integrated task forces.

Austal was selected as the preferred supplier by Republic of Yemen Ministry of Defence in June 2003 to provide a fleet of ten high-speed and reliable patrol boats. The $55m contract included supply of ten patrol vessels, spares, and a substantial training package on vessel operation and maintenance techniques for 60 personnel.

Austal was selected after an extensive requirements- and worldwide market-analysis carried out by the international strategic consultancy firm Greenwich House and the Government of Western Australia.

“The first 37.5m naval patrol boat for the Yemen Navy was launched in February 2004 and the final vessel in December 2004.”

The overall and waterline lengths of the vessel are 37.5m and 32.4m, respectively. The fast patrol boats have a moulded beam of 7.2m and weight of 90t.

The vessel is air-conditioned and consists of commercial-off-the-shelf (COTS) equipment, such as navigation, communication and control systems. The spacious wheelhouse of the vessel with round the horizon-visibility allows seating for up to three persons.

“The vessel is equipped with two 6.4m rigid-inflatable boats (RIBs) on compensated davits with a 40hp outboard engine.”

The vessel is equipped with two 6.4m rigid-inflatable boats (RIBs) on compensated davits with a 40hp outboard engine.

The vessel incorporates deep V, single chine and semi-displacement monohull design, and is built of aluminium. The hull has a moulded depth of 5m and maximum draft of 2.2m.

The Austal 37.5m patrol vessel is equipped with one 25mm twin-barrelled naval gun and two 12.7mm heavy machine guns to execute local and international laws within the territorial waters of Yemen.

The machine guns and small arms are fitted with weapons locker. The ready-use ammunition lockers will be placed adjacent to each gun mounting.

Propulsion and performance of the 37.5m patrol vessel

The patrol boat has a maximum speed of 29kts and cruising speed of 25kts. The patrol range of the vessel is 1,000nm with 20% reserve.

The maximum manoeuvrability for the vessels is achieved by twin rudders made of stainless steel. The rudders are offset from the screws to facilitate easy shaft removal.

The 30m fast patrol craft are built by Austal for the Trinidad and Tobago Coastguard (TTCG).

Joint High Speed Vessels (JHSV) are being built by Austal USA as part of the JHSV programme initiated by the US Navy.