Expand
Joint High Speed Vessels (JHSV).
The preliminary design contract for the JHSV programme was awarded in February 2008.
JHSV features rounded bilge and bulbous bow hull forms made of aluminium.
The JHSV features a Navair level 1 class 2 certified flight deck to support the operations of one helicopter, such as a CH-53E Super Stallion. 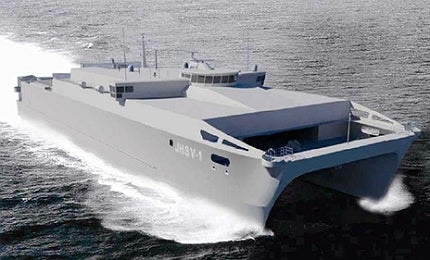 Expeditionary Fast Transport (EPF) ships, previously known as Joint High Speed Vessels (JHSV), are being built by Austal USA as part of the EPF programme initiated by the US Navy.

Operated by the Military Sealift Command, the EPF vessels support joint or coalition force operations of the army and navy.

The main roles of the EPF vessels are transportation of troops, military vehicles, cargo and equipment for a range of global missions. The vessel will also support military logistics and humanitarian relief operations.

Development and construction of the JHSV

The preliminary design contract for the EPF programme was awarded in February 2008. The programme initially called for five EPF vessels to be delivered to the army, and five to the Navy and Marine Corps.

In November 2008, the US Navy placed a $185.4m contract for the detail design and construction of an EPF, with options for up to nine additional ships. The initial critical design review (ICDR) was completed by May 2009.

“In November 2008, the US Navy placed a $185.4m contract for the detail design and construction of a JHSV.”

The first three vessels were named as Spearhead T-EPF 1 (ex-JHSV 1), Vigilant (T-EPF 2) and Fortitude (T-EPF 3) in July 2009. Construction of Vigilant and Fortitude was authorised by the US Navy in January 2010.

The keel for the first ship in the class, USNS Spearhead (T-EPF-1), was laid at Austal’s shipyard at Mobile, Alabama, in July 2010. It was launched and christened as USNS Spearhead in September 2011. The ship successfully completed acceptance trials in September 2012 and was formally handed over to the US Navy in December 2012. The US Navy concluded initial operational testing and evaluation of T-EPF 1 in October 2013.

Construction of USNS Choctaw County (T-EPF-2) (ex-Vigilant) began in September 2010. In May 2011, the US Army transferred all five of its EPFs to the Navy. The T-EPF 2 was christened as USNS Choctaw County in September 2012 and was launched in October 2012. The keel for the third EPF (now, Millinocket) was laid down in May 2012 and the vessel was launched in June 2013. Deliveries of the second and third EPFs took place in June 2013 and March 2014 respectively. The USNS Millinocket (T-EPF-3) participated in the Rim of the Pacific (RIMPAC) Exercise 2014.

The keel-laying of the fourth EPF, Fall River was held in May 2013 and the ship was launched in January 2014. Acceptance trials were completed in July 2014 and the vessel was delivered to the US Navy in September 2014. Keel for the fifth ship in the class, USNS Trenton (T-EPF 5) (ex-JHSV 5), was laid in March 2014 and the vessel was launched in September 2014. It was delivered to the US Navy in April 2015.

The contract options for the construction of eighth and ninth EPFs were exercised in February 2012. The US Navy exercised the $166.9m contract option for the final vessel of the ten-ship programme in December 2012.

The ship does not feature combat systems or the ability to support or use LCS mission modules. EPF is based on the commercial technology, but includes limited military features, such as aviation, C4SI and fire-fighting.

The open unobstructed mission deck has a usable cargo area of more than 1,800m² with clear height of 4.7m and turning diameter of 26.2m.

Performance and power of the US Navy ships

EPF can be operated in shallow-draft ports and waterways, interfacing with roll-on / roll-off discharge facilities and on / off-loading. The stern loading ramp can support a M1A2 Abrams main battle tank.

The ships can transport 635t of payload for more than 1,200nm at an average speed of 35k. EPF is manned by the civilian mariners provided by the Military Sealift Command. The vessel has a crew of approximately 42 people.

The EPF features a Navair level 1 class 2 certified flight deck to support the operations of one helicopter, such as a CH-53E Super Stallion.

The ship is equipped with a centreline parking area for one helicopter, a vertical replenishment area and helicopter control station.

The ship provides accommodation for 42 crew members in two single staterooms, six double staterooms and seven four-bed staterooms. There is airline style seating for more than 312 embarked forces, as well as permanent berths for approximately 104 personnel and temporary berths for 46 troops.