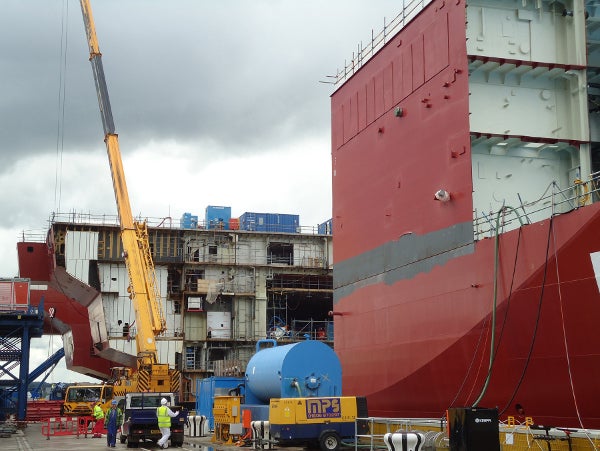 Babcock has started the second of three assembly cycles on the UK Royal Navy’s new Queen Elizabeth-class (QE) aircraft carriers programme at its facility in Rosyth, marking a major milestone in construction.

"The start of assembly cycle B is an intensive period and we are focusing the team on continuing to deliver successfully and to-schedule," he said.

The beginning of assembly cycle B has been marked with the docking of LB02, which is integrated with predominantly accommodation compartments with some auxiliary machinery spaces from BAE in Portsmouth, UK.

Assembly cycle A, the first of the three assembly cycles, involved the putting together of Super Block 03, which is integrated with mid-hull section (LB03), Centre Block 03 (CB03), as well as associated sponsons.

"The start of assembly cycle B is an intensive period and we are focusing the team on continuing to deliver successfully and to-schedule."

Scheduled to continue until spring 2013, assembly cycle B involves integration of LB02 with Babcock-built Lower Block 01 in Devon, and Super Block 03 (SB03), which is already assembled in the Rosyth dock.

Assembly cycle C will involve integration of the remaining blocks, which include the stern sections and island structures, with the hull fully assembled by 2014.

The individual blocks of the two frigates being built at six shipyards around the UK will be transferred to Babcock’s Rosyth facility for final assembly and integration.

HMS Queen Elizabeth and HMS Prince of Wales are scheduled for delivery to the Royal Navy in 2016 and 2018 respectively.