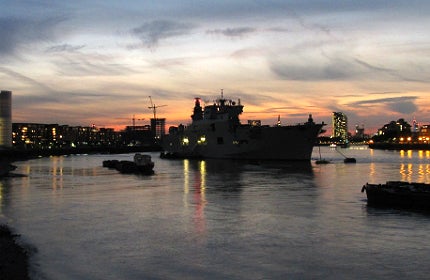 January: US, British and French warships proceed through Strait of Hormuz

The UK Royal Navy announced that it would help ensure national security during Olympic events held around the coast of Weymouth during the 2012 London Olympic Games.

The announcement came as warships from the US, UK and France sailed through the Strait of Hormuz, countering Iranian threats to block the channel in retaliation to EU-imposed sanctions prohibiting military exports.

The Royal Navy destroyer HMS Dauntless was deployed to the Falkland Islands off the coast of Argentina amid rising tensions between the UK and Argentina, regarding the islands’ sovereignty.

HMS Dauntless replaced HMS Montrose as part of a routine, seven-month deployment as the 30th anniversary of the Falklands conflict approached.

The US Navy, meanwhile, began testing an electromagnetic railgun prototype launcher, capable of launching a 50mm projectile 220 nautical miles at speeds between 4,500 – 5,600mph. The weapon system, capable of firing up to ten ten rounds per minute, is expected to be operational by 2025.

The Spanish Navy announced it was considering allowing its F-100 frigates stationed at Naval Station Rota to participate in the US-led Nato anti-missile defence shield.

The announcement followed an agreement signed in 2011 with the US Navy, under which four Arleigh Burke-Class destroyers equipped with anti-missile batteries would be based at the base between 2013 and 2015.

The US Navy also made headlines by submitting its shipbuilding plan for 2013-2042 to Congress, which projected a drop in the number of ships as the navy moved towards a smaller, more versatile fleet.

The UK-led Joint Warrior, NATO‘s largest military exercise, began off the west coast of Scotland as the country prepared to host the 2012 Olympic Games.

The two-week long exercise was aimed at preparing the fleet to respond to unexpected threats and build on lessons learned during 2011’s mission in Libya.

China and Russia also held naval exercises, conducted in the Yellow Sea off China’s east coast, as tensions began to flare over territorial disputes. The six-day drill included simulated anti-aircraft, anti-submarine and search-and-rescue operations and was designed to "uphold regional peace and stability".

The UK MoD announced £350m worth of contracts for the design of nuclear-armed submarines, designed to replace the current fleet of Vanguard-Class submarines.

The new submarines will be equipped with a new nuclear propulsion system and are scheduled to enter service upon the Vanguard’s retirement in 2028.

It was also revealed that China will look to produce two additional aircraft carriers to partner its Liaoning carrier, with the vessels due to be delivered in 2020 and 2022. The plans were revealed by Taiwan National Security bureau head Tsai Teh-sheng as China continued its naval fleet expansion programme.

UK Defence Secretary Philip Hammond unveiled a £1bn contract for the design and development of a new generation of nuclear submarines for the UK Royal Navy’s Trident programme.

Hammond claimed the government was "committed to maintaining a credible nuclear deterrent" and revealed the replacement submarines will be constructed at a total cost of up to £20bn.

Elsewhere, the US Navy revealed that it was to power some ships participating in RIMPAC 2012 with biofuel, fueling the US Navy’s Great Green Fleet initiative. Surface combatant and carrier-based aircraft used the fuel during the exercise, highlighting the navy’s drive for alternative fuels to make up 50% of its fuel use by 2020.

The biennial Rim of the Pacific (RIMPAC) 2012 exercise commenced, aiming to increase stability within the region. As many as 40 ships, six submarines, more than 200 aircraft and 25,000 personnel from 22 participating nations took part in the exercise, with Russia participating for the first time.

In other news, the Indian Navy investigated a computer hacking attack on its Eastern Naval Command which may have resulted in secret plans regarding military operations being compromised. The attack was detected after computer networks were found to have been infected with malware through USB drives.

The US was forced into an embarrassing admission, revealing that a Russian Akula-Class nuclear submarine was able to sail undetected in the Gulf of Mexico, and was only discovered after it had left the area.

The incident was alleged to have occurred at the same time Russian bombers flew within restricted US airspace, as Russia tested US response times, an act that is said to be common.

Across the Atlantic, the UK MoD unveiled the design of the Royal Navy’s Type 26 Global Combat Ship. Heralded as the "backbone of the Royal Navy for decades to come" by defence equipment, support and technology minister Peter Luff, the ships are planned to enter into service after 2020.

The Admiral Kuznetsov-Class aircraft carrier was originally purchased from Ukraine in 1998, and successfully validated its capabilities during various sea trials that had been underway since August 2011.

In other news, the Russian Navy was forced to postpone testing of the Bulava sea-based submarine-launched ballistic missile after a technological fault in the automated launch control system was discovered.

The software issue added to a long list of problems that have disrupted the missile’s development, with only 11 of 19 test launches being declared successful.

China held several naval exercises in the East China Sea to a backdrop of increasing tensions between China and Japan, with territorial disputes again at the centre of such tension.

Both China and Japan claim ownership of a series of islands, called Senkaku in Japanese and Diaoyu in Chinese, that were purchased by Japan. A total of 11 vessels and eight aircraft from China’s Donghai fleet took part, with Japan casting a dim view on the exercises.

Meanwhile, the US Navy continued to advance towards development of a naval railgun by testing a second prototype device, this time developed by General Atomics.

Having tested Bae‘s prototype earlier on in the year, the second prototype testing was held at the Naval Surface Warfare Center Dahlgren Division in Virginia, US.

During testing, a team used the Northrop-built control display unit to control the X-47B’s engine thrust to move the aircraft forward, with 2012 promising to validate its ability to safely operate from an aircraft carrier.

The US Defense Security Cooperation Agency notified Congress of a potential $421m foreign military sale that will see Japan’s Aegis combat systems upgraded, with the nation looking to secure its interests in the face of increasing threats from nations including North Korea.

Japan was forced to ready itself as North Korea successfully launched a rocket, claimed by the nation to be a satellite launch but feared by many in the region to be the testing of long-range missile technology.