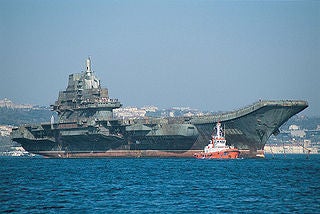 The 300m-long Varyag destroyer will be used in future in the disputed waters of South China Sea, amid rising maritime tensions in the Asia-Pacific region and will also conduct a certain level of operations at sea.

China’s PLA Navy has plans to use the aircraft carrier as a research and training platform and is expected to operate Shenyang J-15 aircraft, J-10 carrier based aircraft, Kamov Z-8/Ka-31 AEW helicopters and Ka-27 ASW helicopters from it.

Originally built for the Soviet Navy, the ski jump-style 37m-wide Varyag carrier has a displacement capacity of 55,000t, around half that of the Japan-based US carrier George Washington.

"Originally built for the Soviet Navy, the ski jump-style 37m-wide Varyag carrier has a displacement capacity of 55,000t, around half that of the Japan-based US carrier George Washington."

The Admiral Kuznetsov-class aircraft carrier is an upgraded version of a partially built vessel purchased from Ukraine in 1998.

It has undergone several trials since August 2011 and successfully validated its capabilities.

Capable of carrying some 50 warplanes, including helicopters and fixed wing aircraft from its flight deck, Varyag is also equipped with an electromagnetic aircraft launch system (EMALS).