Barack Obama’s ‘horses and bayonets’ quip to Mitt Romney during the second presidential debate, while primarily serving as a mockery of the Republican candidate’s misconception of naval demands, also served as a contemporary reminder of the changing face of the US Navy. The navy does, indeed, have fewer vessels than it did in 1916, with commanders opting for concentrated capabilities. When it comes to the US fleet, quality over quantity is now considered optimal.

Perhaps the biggest example of such a procurement attitude has been the Littoral Combat Ship, the US Navy’s latest member of the DD(X) family designed to fulfil a number of capability gaps in a cost effective and efficient manner. Through utilising a modular design and mission modules designed to cater for different roles, the US Navy is hopeful that LCS vessels can fulfil anti-submarine warfare, mine countermeasure, anti-surface warfare, ISR, homeland defence and maritime intercept missions independently.

Or, that was at least the plan. With LCS vessels beginning to lurch off the production line and into sea acceptance trials, the performance of the multimodal ships has come under intense scrutiny. With more than $3.7bn invested into the entire programme and the US Department of Defense facing an uncertain financial future, the mere mention of underperforming equipment is enough to trigger alarm bells. 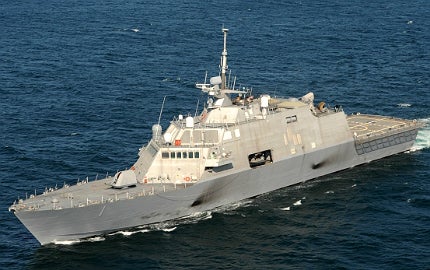 One of the most outspoken critics of the LCS vessels has been former US Marine Corps serviceman John Sayen, contributing a stinging evisceration of the programme to Time’s Battleland Blog. Entitled ‘Big Bucks, Little Bang’, Sayen’s article highlighted several perceived weaknesses and shortfalls of the project, including its cost, performance and capabilities against naval requirements.

"The navy does, indeed, have fewer vessels than it did in 1916, with commanders opting for concentrated capabilities."

Critiques of military equipment from conscientious observers are not exactly hard to come by on the internet, but rarely has a piece of brand new equipment come under such heavy fire prior to entering operational service.

The US Navy has, however, responded in kind. US Navy rear admiral John Kirby retaliated with a staunch defence of the LCS vessels, highlighting several of Sayen’s criticisms and responding to them passionately.

When referring to the navy’s choice to proceed with both designs, Sayen accused the US Navy of attempting to make the LCS programme "too big to fail", an accusation that Kirby deemed unfair.

By selecting both designs, competition between the two manufacturers was encouraged and costs cut. Procurement costs fell by $2.9bn as a result of the competition, an amount Kirby is quick to point out is enough for five LCS vessels, a DDG and a Mobile Landing Platform.

While the spiralling cost of the vessels, especially at a time of fiscal unrest in the US, is an evocative factor, the survivability of LCS craft is integral to the programme’s success.

"Sayen accused the US Navy of attempting to make the LCS programme "too big to fail", an accusation that Kirby deemed unfair."

Sayen’s suggestion that the ships are not survivable in a hostile combat environment stems from reports that allude to poor recorded survivability when under hostile fire, despite the US Navy adamant that it is "comfortable the ship can fight and defend itself in a combat environment."

Kirby is again quick to defend the navy’s corner on this criticism, countering with the claim that no naval vessel can truly be considered completely survivable.

"The LCS is significantly more capable than the older mine counter measure ships and patrol craft it was designed to replace, and stands up well to the frigates now serving in the fleet," adds Kirby, noting that the LCS is not a standalone vessel, but one designed to operate in concert with larger destroyers. 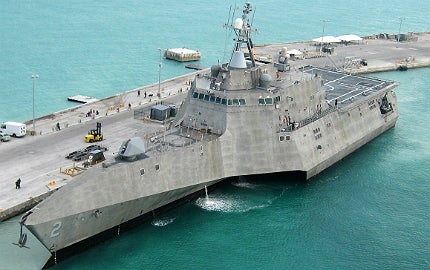 The US Navy’s Independece-Class Littoral Combat Ship, USS Independence (LCS 2). Image courtesy of the US Navy.

One particular area in which Sayen is successful is in highlighting the vastly inflated costs of the programme, although this has little relation to the perceived weaknesses in the vessel’s construction. With the 55-ship fleet now estimated to cost in excess of $40bn, the price of each LCS vessel has risen above $700m – approximately double the cost earmarked in price estimates.

"By selecting both designs, competition between the two manufacturers was encouraged and costs cut."

On this point, Kirby is forced into an admission. Cost growth has definitely occurred; with the price of each vessel currently well above the threshold of $400m.

Kirby does, however, allude to future cost savings, with the average price of LCS vessels falling to below the congressionally mandated cost cap as they become procured under fixed price contracts.

The tenth ship of each production is now estimated to beat the cost cap by tens of millions of dollars, a sum which Kirby says will allow the navy to add capabilities to the vessels without exceeding the budget. Similar measures were achieved in the production of Arleigh Burke DDG vessels, with Kirby quick to point out that for the cost of each vessel, the navy is receiving a ship able to fill multiple capability gaps.

Regardless of Kirby’s response to Sayen’s article, genuine concerns have continued to be raised regarding the LCS programme and the vessels’ performance. A report filed in November 2010 by the Congressional Research Service identified problems relating to combat survivability and cost effectiveness of the entire programme, while singling out engine issues aboard LCS1 and corrosion on LCS2.

"Cost growth has definitely occurred; with the price of each vessel currently well above the threshold of $400m."

Criticism has most recently been reinforced by a report published by the Center for a New America Security in May 2012, which recommended stopping procurement of LCS vessels in 2017, leaving the US Navy fleet with just 27 such ships.

Although accusations that the US Navy was bullish in its attempts to make the programme "too big to fail" are perhaps without foundation, genuine concern appears to have been raised by the navy itself regarding the performance of LCS vessels.

Whereas some criticism could be excused as stemming from a misunderstanding regarding the ship’s role and design capabilities, when it emanates from government sources, it becomes all the more legitimate.

Whether or not these concerns will have any significant impact on the ships’ performance remains to be seen, and will probably remain speculative until such a time that the vessels are tested in combat. Until such a time, it is unlikely that the critics will retire.

With a second term assured, President Obama must now cast a keen eye towards the daunting topic of Middle East relations.

The US Navy’s electromagnetic railgun programme has a chequered history of scientific breakthrough and budget busting.