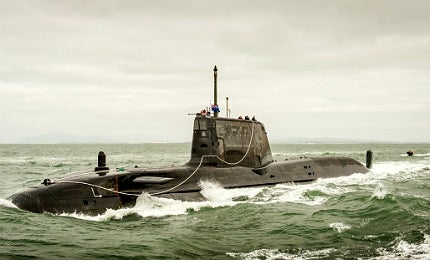 Berenice Baker: How did QinetiQ get involved in the programme?

Ian McFarlane: The MOD approached us. We have been working with them throughout the company’s history, including previous work on submarine grounding, but this was slightly more involved than previous work.

BB: What did you build on for this particular project?

If a submarine or surface ship runs aground and the water starts receding, then you are exposing things on the hull that usually you’d like to keep wet, like the cooling-water intake to an engine.

So we examined which of these "service ports" would become exposed as the water receded and the implication of this on how you would operate the submarine.

BB: How did you do that?

IM: We have 3D models of the submarines for the Royal Navy and some overseas navies we have worked with. We can use our naval architecture software to simulate the submarine drying out as it’s aground in various different scenarios, whether on a sandbank or on rocks, leaning over slightly, or down by the head or stern. Then you can see as the water recedes which bits of the submarine become exposed.

BB: What is the output from these simulations?

IM: The output is a reference manual, which has a suite of scenarios with pictures and graphs. If you were a submarine commander and you think you’ve gone aground on a sandbank, lying at five percent nose down and roughly level, and the tide is going out, what happens next? 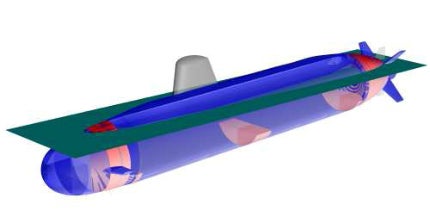 You can then look up in our book what services you’ve going to have to manage or shut off because you’re not going to have cooling water for them, for example. You can then use that as a reverence to help manage part of your emergency response.

BB: Which submarine classes is this solution for?

IM: It’s not targeted towards any particular class. The models and information is submarine-specific, but the general principle is for any vessel, whether submarine or surface ship, military or commercial, and not just in the UK but all around the world.

As long as you have enough data to build a model of the submarine or ship, which we can do here using our software, then we can run the same guidance books for anyone that wants it.

BB: How does this solution fit in with the other submarine services QinetiQ provides?

IM: A well as providing services such as integrated stealth and range, and command information systems services, we also provide naval architecture software and simulation for the design of vessels. Astute has had a lot of work done on our Paramarine software and future classes of submarines will also use it to undertake concept design and stability work.

After the design is done, use test tanks down at the Haslar Marine Technology Park, where we run models of submarines and surface ship to test their resistance, the proportion requirements, their seakeeping capabilities, even how you would tow the submarine if propulsion failed, which we did as a quick response when [Victoria Class] HMCS Chicoutimi’s propulsion failed [in 2004] when it was delivered to Canada.

We also provide assistance, acceptance and service, supporting the navies around the world, including our submarine escape, rescue, abandonment and survival (SMERAS) support. A SMERAS case study has just been approved supporting the trials of Astute.

BB: Could your research influence training?

IM: Yes, training becomes more important as navies move more toward littoral combat as the closer in shore you are the greater the risk of going aground. As platforms become more complicated, there are so many more things to think about, so having a quick reference guide on board becomes extremely useful to the commander and crew.

BB: What is next for QinetiQ’s grounding manuals?

IM: Now we’ve done existing fleets, new vessels will go through that process as well, just to keep continuity across the fleet and consistency of information.

BB: What are QinetiQ’s wider submarine business plans for 2013?

IM: We have our eyes on major international markets. It’s well known that Australia is looking to acquire a new class of submarines to replace their existing Collins Class. The UK is proceeding with the Successor design work as announced in the press last month and the MOD has injected some more money into that. The submarine business has always been an important part of the work we do and remains so.

Naval fleets, dwindling in size, are now expected to tick a number of capability boxes.