President Barack Obama’s election campaign quip about the US military no longer having as many horses and bayonets as it did in 1916 may have primarily been conceived as a concise put down of his Republican rival, but it also succinctly demonstrated the changing face of the US Navy.

Mitt Romney was correct in his assertion that fewer vessels are currently maintained, but this foregoes the fact that capabilities are always changing and expanding, with modern vessels expected to tick as many boxes as possible in order to validate their often exorbitant construction costs.

This has consequentially led to an overwhelming desire for smaller vessels to boast larger, more versatile weaponry with which to engage a wider number of targets.

As the opposition encountered by modern navies has adjusted towards piracy and other equally as nimble vessels, a burgeoning trend has developed for patrol craft to come fitted with weapons capable of engaging and eliminating such threats.

"A burgeoning trend has developed for patrol craft to come fitted with weapons capable of engaging and eliminating such threats."

BAE Systems has identified this gap in the market as potentially lucrative, and has since styled its Bofors line of weaponry to cater for the smaller, more agile patrol craft. The Bofors MK4 system is 40% lighter than previous models and, as a result, can be fitted on much smaller vessels than its predecessors, increasing their firepower. In short, the MK4 provides more bang for its buck.

Bae Integrated Systems director Ulf Einefors hailed the MK4 as a "capability boost" for smaller vessels, adding: "There are a number of markets we have not had traction before, such as in the Persian Gulf region," where the MK4 is enjoying particular success. The system itself uses electrical systems for gun positioning, rather than the more traditional hydraulic version, allowing weight and size to be stripped from the gun.

BAE was triggered into considering the scaled-back version, after market analysis showed strong demand for smaller, lighter guns designed for use aboard lighter vessels. "When you look at what is sold today, it is largely patrol vessels," added Einefors. The MK4 continues to edge towards deployment, with the system completing a ship-borne live fire test in November 2012 aboard a Swedish Navy picket ship.

BAE remains confident that, following trials, the company would be able to deliver the system quickly and efficiently – within 16 months in some cases. "We have now verified the complete prototype system with good results. We have met all schedules and budgets and matched or exceeded all pre-defined requirements," Einefors added.

LCS not faring as well

While BAE appears to be making progress in its ability to cater for the demands of patrol vessels, the same cannot be said for the US Navy.

"The Bofors MK4 system is 40% lighter than previous models and, as a result, can be fitted on much smaller vessels."

The US Navy’s new class of patrol ship, the Littoral Combat Ship (LCS), has begun to roll off the production line to much fanfare.

Vaunted as the next generation of patrol craft, much was expected of the new line of vessels, but concerns regarding their performance have started to reverberate. One such concern relates to the weaponry present in the LCS surface warfare module, which has been limited by contract cancellations and the limited range of replacements.

Originally, the surface warfare module was due to be equipped with the Non-Line of Sight Launch System (NLOS-LS) missiles, which would possess a range of approximately 25 miles. Following its cancellation in 2011 owing to financial concerns and performance issues, the US Navy has instead opted to use the Raytheon-built Griffin missiles.

"The US Navy’s new class of patrol ship, the Littoral Combat Ship (LCS), has begun to roll off the production line to much fanfare."

This trade-off has been resoundingly criticised by the programme’s detractors, as the newly selected missiles significantly limit the LCS’s range and firepower. Instead of the 25 mile range of the NLOS-LS missiles, Griffin will pose as a threat within only 3.5 miles of the target. This has rendered the LCS vessels incapable of providing naval fire support to ground forces, but has managed to boost capabilities in other areas.

The Griffin missiles are more accurate over shorter distances than the cancelled NLOS-LS variant, allowing LCS ships with the surface warfare module to efficiently engage with smaller, more agile vessels including patrol craft and pirate skiffs. Not only this, but the Griffin missiles have also demonstrated their efficacy in targeting UAVs, a feat which would prick the interest of US military decision makers that increasingly see the future of combat heading in such a direction.

Not only is the US Navy’s X-47B continuing in its development, with the drone having completed carrier deck tests earlier in January 2013, but it is widely expected that China’s Guizhou Soar Eagle is to be fitted with sensors for designating naval vessels for targeting, whereas Iran’s increasing prevalence in UAV design could lead to the US Department of Defense feeling the need to protect its naval ships from such capabilities.

In order to compliment adjustments to weaponry and further increase the capabilities of smaller vessels, purpose-built radar equipment for patrol craft and small combatants is now entering the market.

"The Griffin missiles are more accurate over shorter distances than the cancelled NLOS-LS variant."

In 2012, Northrop Grumman oversaw the development of a new form of X-band coherent radar system, custom built for such a purpose. The Seaguard XBCR system enables the detection of aircraft 20 nautical miles over either sea or land at altitudes up to 6,000ft, while also enabling the detection of high or low speed surface targets, such as rigid-hull inflatable boats, not too dissimilar from those operated by pirates in the Gulf of Aden.

The clamour to enhance the capabilities of patrol vessels and smaller combatants in such a manner shows the willingness to entrust them to fulfil a multitude of roles, and the very design of the US Navy’s LCS is also key example of this. The ships can be tailored in ports with custom-built modules, tinkering the ship’s payload to what the situation demands. 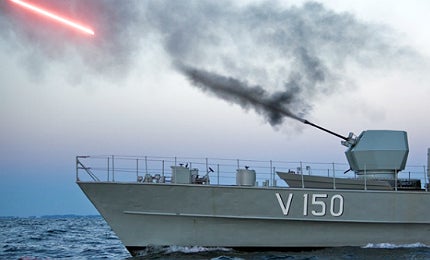 While the US has opted to address its current inability to engage smaller, more nimble control craft by tinkering with weaponry on existing ships, Iran has adopted a much more unconventional approach.

The Bradstone Challenger, a custom-designed speedboat that set the new record for traversing the British Isles in 2005, was acquired by Iran following its feats, with the Iranian Navy alleged to have copied its design. Since then, weapon systems are alleged to have been fitted onto the Challenger duplicates, creating a novel equivalent of a fast-attack craft.

Citing the craft’s potential to down a $4.5bn carrier, one unnamed US naval officer told the Telegraph that such a situation would be a "nightmare scenario", relating to an incident in 2008 when the USS Hopper was swarmed by a number of small Iranian speedboats in what President Bush labelled as a "provocative act".

With Iran seemingly prepared to counter any US presence in the Strait of Hormuz with unconventional threats such as this, it’s of little wonder that no only are decision makers having a rethink as to how their vessels are armed, but that equally as nimble vessels are enjoying a period of popularity.