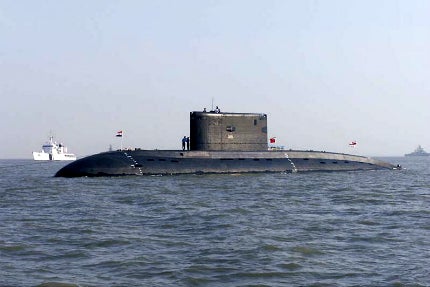 The Indian Navy’s Sindughosh-Class submarine, INS Sindhurakshak (S63), has submerged off the naval dockyard in Mumbai, following an explosion shortly after midnight on 14 August 2013.

Even though an investigation is under way to establish the cause, unidentified sources attributed the explosion to a defective battery, which resulted in similar submarine accident in Visakhapatnam in 2010.

US Naval Research Laboratory (NRL) scientists have developed a new small, lightweight sensor, known as Silicon Nanowires, in a vertical array with a porous electrode (SiN-VAPOR), to enhance improvised explosive device (IED) detection for the military.

The SiN-VAPOR sensor, which is in the early stages of development, has demonstrated its detection capability on the parts-per-billion, and even parts-per-trillion, level of sensitivity, marking the first step in using trace chemical detection to solve the IED detection problem.

The SiN-VAPOR programme aims to have a small field-deployable, distributed sensor on the same form factor as the cell phone.

The Turkish undersecretary for defence industries (SSM) has issued an official request for information (RFI) for procurement of new assault boats, undisclosed military officials have revealed.

An official, on the condition of anonymity, was quoted by the news agency as saying the competition primarily seeks local shipyards but will also feature a foreign contest.

The Brazilian Navy’s third and final Bae Systems-built Amazonas-Class ocean patrol vessel (OPV), Araguari, has set sail from the UK, on a journey to its home port in the north-eastern city of Natal, Brazil.

In preparation for the journey and the operations, Araguari’s crew of 80 has also completed the UK Royal Navy’s flag officer sea training, with support from the BAE team.

On its journey, the latest ship will undergo a diplomatic tour of Europe.

The German Navy has awarded a contract to Indra to install its satellite communication systems onto their Type 404 Elbe-Class support ships.

Under the three-year contract, the company will manufacture, install and test the satellite communication systems in support of the German Navy’s type 404 Elbe-Class logistical support vessels to enhance communications capability at sea.

Indra will install the terminals to enable secure communication in some of the most difficult conditions for the ships anywhere in the world, and will also provide training of the ships’ crews as part of the contract.