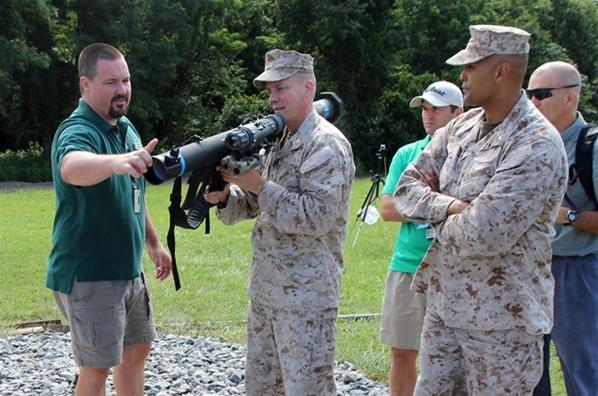 NSWCDD has developed a new version of the weapon called the MK153 Mod two, which is currently in developmental testing at its base in Dahlgren, Virginia, US.

The Mod two launcher and its family of rockets comprise a weapon system that can hit targets at ranges between 50m and 500m, said the US Marine Corps.

"The main focus is improving the SMAW and there are a lot of things that go into that," Smith said.

As part of the enhancement, the SMAW Mod two will include a new aiming system that is more reliable to maintain, compared to the current targeting and ranging system.

SMAW project engineer Daniel Ross said that the spotting rifle is the most maintenance intensive component of the weapon.

"It will be more user-friendly, lighter in weight, easier to maintain and more available to the marine."

The spotting rifle, which will add several pounds to the SMAW, is believed to reduce the availability of the entire weapon to marines. Apart from alerting targets to their location with the sound of gunfire at the time of aiming, the spotting rifle also allows marines to expose themselves to enemy fire for long periods.

The modular ballistic sight (MBS) features a laser range finder and thermal weapon sight that will provide a firing solution using a displaced reticle with its crosshairs adjusted for distance and environmental factors.

"There are so many little hidden gems about the SMAW Mod two that will make it more user-friendly, lighter in weight, easier to maintain and more available to the marine," Smith added.

According to Marine Corps, the Mod 0 weighs 16.5lbs, while the SMAW Mod two launcher, with the MBS attached, weighs about 13lbs and 8.5lbs with the MBS detached.

The enhancement is based on the ‘follow-on to SMAW’ (FOTS) requirements, a programme initiated in 2002 to develop a successor to the SMAW system.