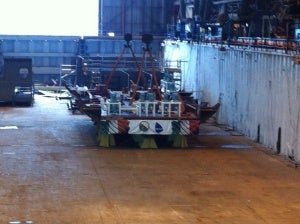 STX Marine is pleased to report the keel-laying of the first of two Offshore Patrol Vessels (OPVs) for the Irish Naval Service (INS). The keel was laid by Commodore Mellet, Flag Officer Commanding Naval Service, on 18 May, 2012 at Babcock Marine’s shipyard in Appledore, North Devon. The ceremony was attended by senior representatives of the Department of Defence, the Naval Service and STXM.

The new OPVs (PV90) are based upon the STXM PV80 design, two vessels delivered to INS in 2000 and 2001, with an increased length (10m) and depth (0.60m). In addition, the vessels will have an increased speed to 23 knots. These design changes will improve INS’s operational capability in rough waters in the Atlantic. The vessels are to be delivered in early 2014 and 2015.

Vard Marine has announced that Dave McMillan, the company's president and CEO, will retire on 31...

Vard Marine (VARD) and Philly Shipyard have been awarded a contract to lead a study...