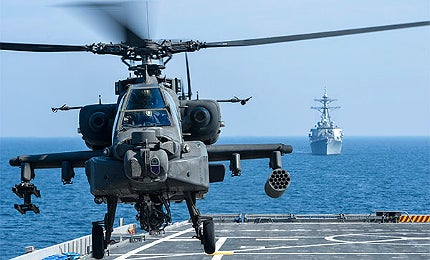 The USS Ponce (AFSB(I)-15) was formerly an amphibious transport dock ship, which has been converted into an interim Afloat Forward Staging Base for mine counter-measure and coastal patrol vessels, as well as helicopter operations. The ship will also support embarked forces of the United States Central Command (USCENTCOM) and US 5th Fleet.

"The US Navy announced that the USS Ponce will be converted into a test bed to deploy first ever Laser Weapon System."

The USS Ponce was originally scheduled to be decommissioned in March 2012, but the decision has been postponed in response to requests from US Central Command for an AFSB(I).

The Military Sealift Command (MSC) started the conversion of the USS Ponce at Mitsubishi Heavy Industries’ (MHI) shipyard in Norfolk in February 2012. The major refit work was completed by April 2012. The USS Ponce departed Naval Station Norfolk for deployment in June 2012.

The refurbishment replaced the bridge equipment and navigation systems with fully automated systems. The work also involved the overhaul of main propulsion boilers and equipment, renovation of galley and accommodation and clean-up of main and auxiliary condensers.

In April 2013, the US Navy announced that the USS Ponce will be converted into a test bed to deploy first ever Laser Weapon System (LaWS). The installation of LaWS aboard the USS Ponce is expected in fiscal year 2014. The laser gun will destroy drones, small boats and other air or sea-borne threats. The US Navy plans to deploy such low cost laser weapons to a number of vessels in its fleet in future.

The USS Ponce was the final ship of the Austin Class amphibious transport docks, built by Lockheed Shipbuilding in Seattle, Washington. Her keel was laid down in October 1966. The ship was launched in May 1970 and commissioned into the US Navy in July 1991.

The well deck of USS Ponce can house landing craft air cushion (LCAC) boat or Landing Craft, Utility (LCU), or Landing Craft, Mechanised (LCM) or Amphibious Assault Vehicles, as well as 900 combat troops. The ship also carries supplies and equipment of the embarked troops. The vessel can ballast down in the water for allowing the landing craft and amphibious vehicles to enter and exit the well deck.

"The installation of LaWS aboard the USS Ponce is expected in fiscal year 2014."

The USS Ponce will also be fitted with the Laser Weapon System (LaWS) built by the Naval Sea Systems Command. The LaWS can destroy unmanned aerial vehicles (UAVs) and swarming small boats by releasing a solid-state infrared beam. The weapon can be paired with the radar system of the Phalanx CIWS or other targeting source, for target acquisition.

Auxiliary power is generated by four electrical power generators powered by boilers. The gen sets provide electricity for the ship systems. The propulsion system provides a maximum speed of 21kt to the vessel.

USS Enterprise (CVN-65) was the first nuclear-powered aircraft carrier and the largest active warship in the world.