The vessel has been part of the US Navy fleet since 1989. Image courtesy of US Navy photo by Mass Communication Specialist 3rd Class Amanda L. Kilpatrick.

The Nimitz-Class vessel has a maximum speed of 30kts. Image courtesy of US Navy photo by Mass Communication Specialist Seaman Joshua E. Walters.

The vessel is undergoing a major overhaul to refuel its reactors. Image courtesy of US Navy photo by Mass Communication Specialist 2nd Class Colby K. Neal.

The ship's overhaul includes a major upgrade to its systems. Image courtesy of US Navy photo by Mass Communication Specialist Seaman Zachary A. Anderson. 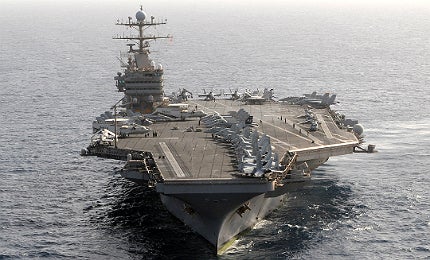 USS Abraham Lincoln (CVN 72) is the fifth vessel of the Nimitz-Class nuclear-powered aircraft carriers. The vessel is homeported in Norfolk, Virginia. USS Abraham Lincoln has carried out several humanitarian missions in the Persian Gulf and Pacific regions, apart from combat operations.

"USS Abraham Lincoln has carried out several humanitarian missions in the Persian Gulf and Pacific regions."

The USS Abraham Lincoln’s keel was laid in November 1984. She was launched in 1988 and delivered to the navy in 1989. The vessel was built by Northrop Grumman Shipbuilding.

Huntington Ingalls Industries (HII) has been awarded a $2.6bn contract for the RCOH of USS Abraham Lincoln. Northrop Grumman Corporation had carried out the planning work for the overhaul as part of an $80.1m contract awarded in March 2010.

USS Abraham Lincoln arrived at HII’s Newport News shipyard in March 2013 to undergo the overhaul. The vessel was originally scheduled to arrive at the shipyard in February 2013 but was delayed due to uncertainties related to the funding of the overhaul under the defence budget.

The overhaul is now being funded as part of a planning contract. The RCOH will refuel the ship’s reactors. It will also include the modernisation and major upgrade of the ship’s 2,300 compartments, 600 tanks, flight deck, catapults, combat systems, the island and various other systems.

A modern communication system will be installed and all mechanical electrical systems will be replaced during the overhaul.

Design of the fifth Nimitz-Class vessel

"Huntington Ingalls Industries (HII) has been awarded a $2.6bn contract for the RCOH of USS Abraham Lincoln."

The vessel features an island on the starboard side and an angled flight deck on the port side.

The flight deck is serviced by four hangar elevators, three of which are located on the starboard and one to port.

The vessel is equipped with four steam catapults.

USS Abraham Lincoln can carry 90 aircraft models helicopters. The vessel can accommodate upto 5,680 people, including the ship’s crew of 3,200 and an aircrew of 2,480.

Radars onboard and aicraft support

USS Enterprise (CVN-65) was the first nuclear-powered aircraft carrier and the largest active warship in the world. She entered service with the United States Navy in November 1961.