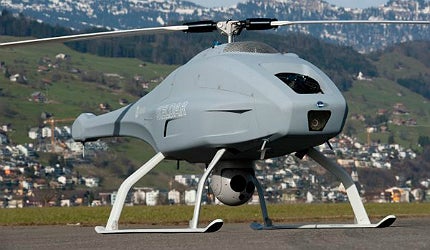 Skeldar V-200 Maritime is a medium-range vertical take-off and landing (VTOL) unmanned aerial vehicle (UAV) developed by the Saab Group. The UAV, capable of being launched from the deck of any vessel, delivers real-time intelligence and surveillance. Skeldar V-200 is a more cost-effective alternative to conventional helicopters used in surveillance missions.

The Skeldar V-200 development began in 2004. The Skeldar 5 POC prototype completed its maiden flight in May 2006. The development version was designated as Skeldar V-200 in 2008. It is being offered for the US Navy ISR programme. The US Navy plans to equip some of its Arleigh Burke Class destroyers with either VTOL or fixed-wing platforms.

The Skeldar V-200’s major mission capabilities include surveillance, reconnaissance, target attainment and transfer of target data to strike platforms. The UAV is also used for instant battle damage assessment and control of indirect fire. It can be occasionally used for logistics support and ship-to-ship or ship-to-land transfers in rough weather conditions.

"Skeldar V-200 has a dual payload capability and is also offered with various COTS payloads for specific missions."

Designed based on the CybAero APID 55 airframe, the Skeldar V-200 features a compact layout with segments for accommodating various payload reconfigurations. The equipment compartments are easily accessible through panels. The vertically launched UAV requires no launch or recovery equipment.

The aircraft is equipped with integrated brakes to control the revolution of the rotors. The main rotor can be rapidly dismounted for storage and maintenance. The UAV is capable of flying in a hovering mode and moving slowly, or with high speed in any direction to penetrate enemy lines. It also complies with the national aviation regulations.

Skeldar V-200 has a dual payload capability and is also offered with various COTS payloads for specific missions. The payloads can be configured according to the mission requirements. The open architecture allows the integration of future payloads.

The UAV control station (UCS) can be integrated into the operator consoles and combat management systems of a ship. The operator console includes a mission computer display for managing missions, payload control and handling.

"The UAV, capable of being launched from the deck of any vessel, delivers real-time intelligence and surveillance."

Skeldar V-200 can be operated by two to four personnel, including the UCS operator. The system can be controlled by the shipboard crew, avoiding the requirement of having a dedicated UAV crew. The operator can use Point-and-Fly or Point-and-See techniques to guide the UAV towards a destination or surveillance target.

Once the route is set, the UAV will autonomously fly towards the target point through the assigned way points and deliver real-time data to the control station and remote video terminals.

Navigation and communications of the medium-range VTOL UAV

Communications are relayed through dual command and control data link operating in L, C or S-band, as well as a sensor data link.

Skeldar UAV is powered by a two-cylinder, in-line, two-stroke, liquid cooled internal combustion engine. The engine is rated at 55hp and runs at a constant 6,000rpm. It is equipped with an electronic fuel injection / ignition system.

The UAV can fly at a maximum altitude of 4,500m. Its maximum speed is 130km/h and endurance is five hours. The maximum take-off weight is 200kg. The mission radius is more than 100km.

This project forms part of our recent analysis and forecasts of the global unmanned aerial vehicles (UAV) market available from our business information platform Strategic Defence Intelligence. For more information click here or contact us: EMEA: +44 20 7936 6783; Americas: +1 415 439 4914; Asia Pacific: +61 2 9947 9709 or via email.