The warship has an overall length of 284m. Image courtesy of Indian Navy.

INS Vikramaditya can sail at speeds over 30kt. Image courtesy of Indian Navy. 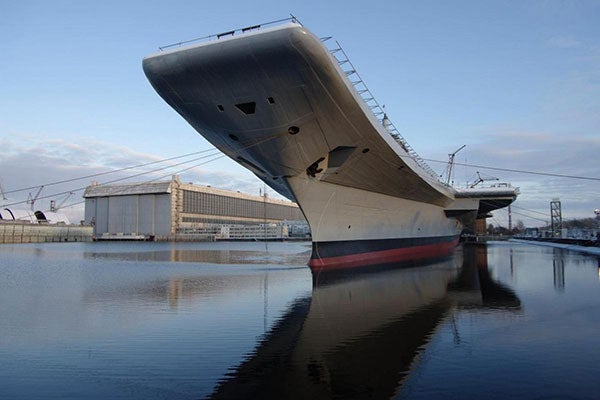 The warship has been extensively refurbished with new propulsion systems, hull sections, sensors and flight deck. It was operationally deployed with full complement of MiG-29 aircraft in May 2014.

The Admiral Gorshkov (Project 11430) is a modified Kiev-class aircraft carrier built at the Nikolayev South shipyard, for the Russian Navy. Initially known as Baku, the carrier was launched in 1982 and commissioned in 1987. The Admiral Gorshkov was inactivated in 1995.

The Vikrant Class are the first indigenously designed and built aircraft carriers in India.

India entered into negotiations with Russia for the acquisition of Admiral Gorshkov aircraft carrier in 1994 and signed a memorandum of understanding in December 1998. The Union Government of India and the Federation of Russia signed an inter-governmental agreement for the acquisition in October 2000.

In January 2004, India signed a $1.5bn deal with Russia for the modernisation of Admiral Gorshkov and delivery of 12 single-seat MiG-29K and four two-seat MiG-29KUB aircraft. The refurbishment works were commenced at the FSUE Sevmash shipyard in Severodvinsk, Russia, in April 2004. The cost for repair and refit of the carrier, spares, infrastructure augmentation and documentation was estimated to be $974m. The modernised warship was initially scheduled to be delivered by August 2008 but was delayed due to cost overruns.

The two countries reached an agreement on the final delivery and entire cost of the upgraded warship in December 2009. The deal was finalised in March 2010, the cost was fixed at $2.33bn and delivery was scheduled for December 2012.

The overhaul was completed by March 2012 and the first sea trials began in June 2012. The delivery was however delayed again due to defects encountered in boilers and the need for replacement of additional electrical cables.

The modernised carrier completed final sea trials in the White Sea in July 2013 and aviation trials in November 2013. The INS Vikramaditya will be integrated with close in weapon system (CIWS) and Barak 8 long-range air-defence system (LR-SAM) between 2015 and 2017.

The refurbished aircraft carrier INS Vikramaditya is equipped with 234 new hull sections constructed using 2,500t of steel. It has an overall length of 284m, a maximum beam of 60m, height of about 60m and a displacement of 44,500t.

The warship features 22 decks and 2,500 compartments, of which 1,750 were completely re-built. It can carry more than 1,600 personnel including crew. Sponsons are installed to increase the breadth at the flight deck.

The modifications also included replacement of 2,300km of old electrical cables with new cables, upgrades to bulbous bow, and replacement of distilling plants. The aft aircraft lift and ammunition lifts were also upgraded.

Sensors onboard the Indian aircraft carrier

The ship is also fitted with an automated Resistor-E radar complex and various subsystems to provide air traffic control and approach / landing for carrier-based aircraft. The radar system provides short-range navigation and flight data for the aircraft. The precision approach guidance system of the Resistor-E complex provides flying craft guidance during a precision approach.

The warship can carry more than 8,000t of low sulphur high speed diesel. It has a maximum speed of over 30kt and can attain a maximum range of 7,000nmi. It can endure at sea up to 45 days.