Chang Bogo Class attack submarines are in service with the Republic of Korea Navy (ROKN). The class is a South Korean license-built version of the German Type 209-1200 Class. Originally developed by Howaldtswerke-Deutsche Werft (HDW), the Chang Bogo Class is built by Daewoo Shipbuilding and Marine Engineering (DSME).

“The Chang Bogo Class includes nine submarines. The ROKN placed an order for the construction of three submarines in 1987.”

The Chang Bogo Class includes nine submarines. The ROKN placed an order for the construction of three submarines in 1987. The first boat in class, ROKS Chang Bogo (SS-61), was launched in June 1992 by HDW at Kiel, Germany. The remaining two subs were built by Daewoo at Okpo in South Korea, using German-supplied materials.

The ROKN placed two separate contracts with Daewoo in October 1989 and January 1994 to build a total of six submarines, bringing the total number of Chang Bogo Class submarines to nine. The nine submarines were commissioned into the ROKN between 1993 and 2001.

In December 2011, DSME was awarded a $1.1bn contract by the Indonesian Ministry of Defence (MoD) for the delivery of three improved Chang Bogo Class subs to the Indonesian Navy. Two submarines will be constructed in South Korea, in association with PT PAL Indonesia, while the third boat will be outfitted at PT Pal shipyard in Surabaya. Deliveries are scheduled for the first half of 2018.

The Chang Bogo Class incorporates a single hull design from the Type 209/1200. The submarines are designed to perform low-noise operations. Each submarine is fully equipped with automated systems, to reduce the workload of the crew.

The submarine has a length of 56m, beam of 6.2m and a draft of 5.5m. The submerged displacement of the ship is 1,285t. The Chang Bogo Class submarine can complement 33 crew members.

The Chang Bogo Class is equipped with a modern combat management system which integrates multipurpose consoles for the sonar, navigation systems and weapon systems.

“The submarine carries a total of 14 SUT Mod 2 torpedoes. Each torpedo can carry a 260kg warhead.”

The Atlas Elektronik integrated sensor underwater system (ISUS) aboard the submarine gathers information about potential threats from onboard sensors. It allows the crew to analyse the scenario for delivering a rapid response.

Chang Bogo Class submarines are fitted with eight 533mm tubes, capable of firing Surface and Underwater Target (SUT) Mod 2 torpedoes. The submarine carries a total of 14 SUT Mod 2 torpedoes. Each torpedo can carry a 260kg warhead for a maximum range of 28km.

The submarines can hold 28 mines in place of the torpedoes. Some of the Chang Bogo Class submarines are capable of launching UGM-84 Sub Harpoon missiles. Na Daeyong (SS-069) was the first Chang Bogo submarine to launch a Harpoon missile. It sunk a retired American destroyer by firing a Harpoon missile during RIMPAC 2002, a biannual maritime training exercise involving nations of the Rim of the Pacific.

The Indonesian Chang Bogo submarines are anticipated to be fitted with indigenously developed combat management systems, torpedoes and countermeasures supplied by LIG Nex1.

Sensors on the Republic of Korea Navy submarines

The Chang Bogo Class is equipped with CSU 83 hull-mounted sonar supplied by Atlas Elektronik. The CSU 83 is a search and attack sonar operating on a medium frequency in active / passive modes. The submarines were believed to be fitted with passive towed array sonar for detecting submerged submarines.

Sagem was contracted by Defence Acquisition Program Administration (DAPA) to upgrade the navigation system of the Chang Bogo Class in September 2011. Each submarine is fitted with two Sigma 40XP inertial navigation systems (INS).

The Sigma 40XP integrates superior laser gyros and modern digital filtering techniques. The system can deliver better performance in the harsh operational conditions that are experienced by submarines during dives.

The Chang Bogo Class is powered by diesel-electric propulsion system integrating four MTU 12V 396 SE diesel engines, one Siemens electric motor, a shaft and a propeller. The propulsion system provides a maximum submerged speed of 22kt and a range of 595km when totally submerged.

Chungmugong Yi Sunshin Class destroyers are in service with the Republic of Korea Navy. The multipurpose destroyer class was the second to be developed under the Korean Destroyer eXperimental (KDX) programme.

The Gwanggaeto the Great Class (KDX-I) destroyers were built by Daewoo Shipbuilding and Marine Engineering (DSME) for the Republic of Korea Navy (ROKN). 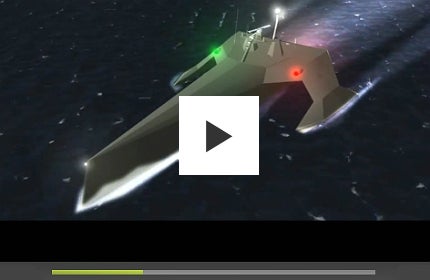 Science Applications International Corporation (SAIC) has unveiled its vision for a DARPA-sponsored programme to develop an unmanned vessel for long-duration tracking of even the quietest enemy submarines. Read more here.