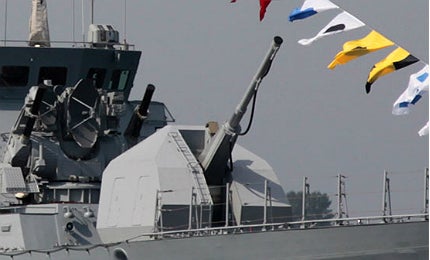 The third and the last ship in class, Makhachkala, was laid down in March 2006 and launched in April 2012. The delivery of the ship was delayed due to the installation delays of the 100mm gun mount. Makhachkala completed state sea trials in October 2012. The ship was delivered to the Russian Navy in December 2012. It was commissioned into Caspian Flotilla in February 2013.

"Project 21631 (Buyan-M) corvettes, the missile variants of Project 21630, are being constructed at the Zelenodolsk shipyard."

Project 21631 (Buyan-M) corvettes, the missile variants of Project 21630, are being constructed at the Zelenodolsk shipyard. The new vessels are expected to be equipped with missiles, artillery weapons and electronic countermeasure equipment. An export variant known as Project 21632 Tornado is also being proposed.

Buyan Class is a river-sea type corvette designed by Zelenodolsk Design Bureau. The design incorporates stealth features to reduce the radar cross section. The flexible open architecture of the ships allows for modifications according to the future requirements.

The main gun fitted on the bow deck is a single A-190 100mm cannon. Close-point defence is provided by two AK-306 30mm close-in weapon systems. The ship is also armed with A-215 Grad-M naval multiple launch rocket system. The system can fire up to 40 122mm rockets against onshore targets.

The electronic warfare aboard the Buyan Class includes two PK-10 shipborne decoy launching systems mounted on either side of the stern behind the superstructure. The PK-10 is a close-range decoy dispensing system designed to enhance the self-defence capability of the vessels. The system can launch up to ten electronic and optronic decoys to deceive the incoming anti-ship missiles.

"The keel for the first corvette in class, Astrakhan, was laid down in February 2005 at Almaz Shipyard in St. Petersburg."

The propulsors, with reduced noise and running vibration, provide high manoeuvrability. Each engine delivers a maximum power output of 3,970kW at 2,000rpm.

The engine is comprised of seven banks of eight cylinders. The usage of aluminium castings reduces the weight of the engine. A crankshaft driven supercharger provides boost pressure to the engine. The supercharger is equipped with water chilled inter-cooler.

The propulsion system provides a maximum speed of 28kt and range of 1,500nmi. The Buyan Class corvettes have a mission endurance of ten days.

The Udaloy Class of anti-submarine destroyers were built for the Russian Navy between 1980 and 1999.

Project 20380 Steregushchy Class corvettes are the new multirole vessels being built by the JSC Severnaya Verf shipyard and Amur Shipbuilding Plant for the Russian Navy.