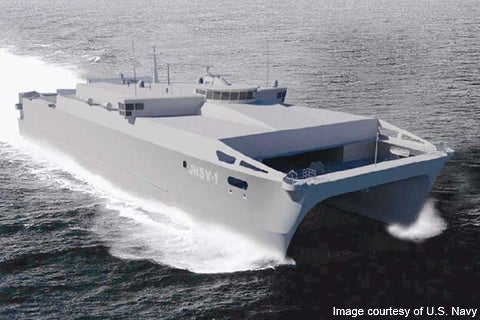 The US Navy’s first Spearhead-class joint high-speed vessel (JHSV), USNS Spearhead (JHSV 1) has set sail off layberth in Little Creek, Virginia, US, to undergo operational test and trials prior to its maiden deployment, scheduled in the first quarter of 2013.

During the operational testing, USNS Spearhead will validate its systems performance, in addition to completing crucial crew and training certifications.

Austal was awarded a $1.6bn contract in November 2008 to build the first JHSV, with options for nine additional vessels between 2009 and 2013 for the US Navy.

In December 2012, the US Navy took delivery of the USNS Spearhead at Austal Shipyard in Mobile, Alabama, US, following the completion of acceptance trials in September 2012.

Operated by the Military Sealift Command, the 2,400t JHSV can cruise at an average speed of 35k and is powered by four MTU 20V8000 M71L diesel engines, driving four Wartsila WLD 1400 SR waterjets.

The Spearhead-class vessels have been designed to support missions such as intra-theatre transportation of troops, military vehicles, cargo and equipment for a range of global missions, as well as other missions in support of joint or coalition force operations of the army and navy.

The second ship of the class, Choctaw County (JHSV 2), was christened on 15 September 2012, while other vessels are currently under various stages of construction at Austal’s facility in Mobile, Alabama, US.