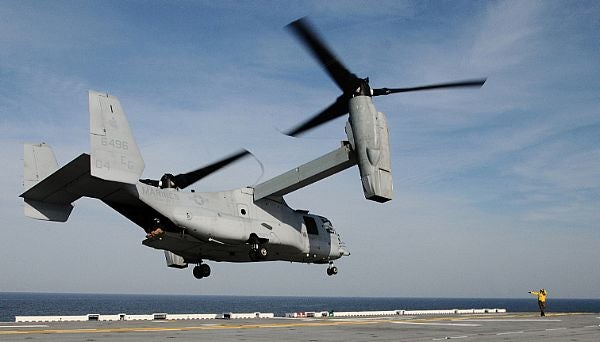 The US Marine Corps’ (USMC) MV-22 Osprey tilt-rotor aircraft has performed landing mission aboard Japanese Maritime Self Defense Force (JMSDF) ships for the first time off the Southern California coast.

Before flying ashore from the JS Hyuga, the crew will also demonstrate the MV-22 aircraft’s utility and perform a humanitarian assistance and disaster relief (HADR) operations, shutdown, tow procedures, as well as lower and raising the ship’s elevator.

Commenting on the exercise, 1st Marine Expeditionary Brigade (MEB) commanding general brigadier general John Broadmeadow said the aim was to improve working relationships and demonstrate the MV-22 Osprey capabilities, which enables Marine Corps to quickly respond to a crisis from sea or land.

"The crew will also demonstrate the MV-22 aircraft’s utility and perform a humanitarian assistance and disaster relief (HADR) operations."

Scheduled to conclude on 28 June, the exercise’s synthetic-based portion was completed earlier this year, while the live portion includes more than 5,000 personnel from the US, Canada, Japan and New Zealand, as well as military observers from seven countries.

Additional missions involved in the drill are training for force-on-force, special operations, infantry immersion and medical procedures, as well as operational planning, shipboard driver qualification, raids, MV-22 takeoffs and landing aboard a Japanese ship, and the largest multilateral amphibious landing.