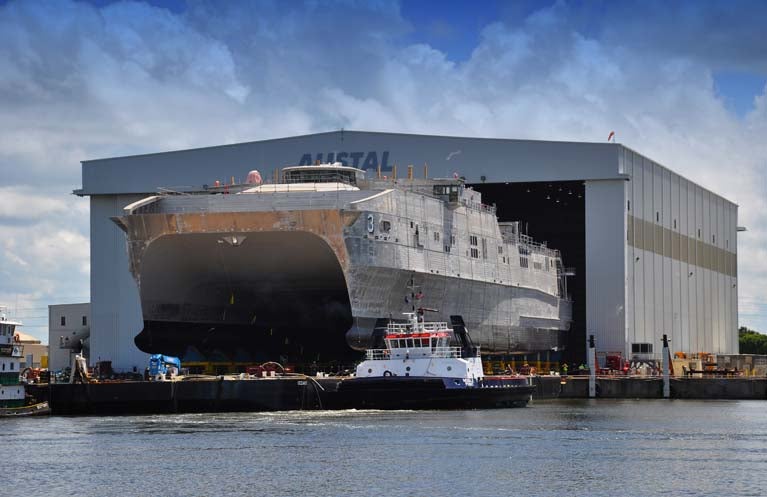 The US Navy’s third Spearhead-class joint high-speed vessel (JHSV), USNS Millinocket (JHSV 3), has been launched by Austal, marking a milestone in the JHSV programme.

The 103m-long high-speed catamaran has been designed as part of the US Department of Defense’s (DoD) ten-ship contract, worth more than $1.6bn, to support theatre cooperating missions, US Marine Corps, Seabees and Army transportation.

JHSV programme manager captain Henry Stevens said that the ship is now ready to enter the final construction phase, which includes test and activation of major equipment such as the propulsion plant.

Scheduled to be delivered to the navy later this year, USNS Millinocket will undergo final outfitting and activation prior to sea trials.

Austal JHSV team includes General Dynamics Advanced Information Systems, which is responsible for the design, integration and testing of the ship’s navigation and aviation systems, as well as control, communications, computers, and intelligence (C4I) systems.

"With JHSV 1 doing well on the east coast, JHSV 2 recently completing acceptance trials and handed over to the navy, the keel laying of JSHV 4 at the end of May, and now the launch of JHSV 3, the JHSV programme is maturing well."

Austal USA president Craig Perciavalle said: "With JHSV 1 doing well on the east coast, JHSV 2 recently completing acceptance trials and handed over to the navy this morning, the keel laying of JSHV 4 at the end of May, and now the launch of JHSV 3, the JHSV programme is maturing well."

Equipped with Navair level 1 class 2 certified flight deck to support the CH-53E Super Stallion helicopter operations, the JHSVs can be used for military logistics and humanitarian relief operations, in addition to transportation of troops, military vehicles, cargo and equipment.

Image: Austal floats out USNS Millinocket at its facility. Photo: courtesy of Austal.