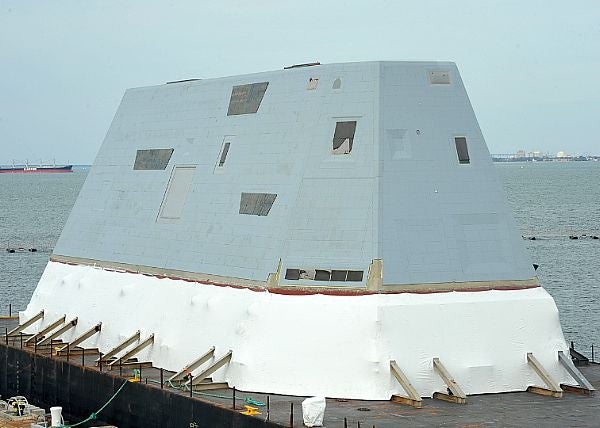 The US Navy’s first Zumwalt-class destroyer (DDG-1000) has completed integration of the 1,000t steel and composite deckhouse on to its hull at General Dynamics Bath Iron Works facility in Bath, Maine, US.

Delivered to the navy in October, the integration of the 155ft-long deckhouse onto the future USS Zumwalt (DDG 1000) hull marks a major milestone in the ship construction programme.

"The industry government team meticulously planned the 100ft static lift of the deckhouse and translation of the 610ft hull into position under the deckhouse."

Designed to enable the ship to feature a significantly smaller radar cross-section than any other fleet vessel, the Huntington Ingalls Industries (HII) built deckhouse will serve as a platform for installation of bridge, radars, antennas and intake/exhaust system.

In addition to providing independent forward presence and deterrence for carrying out operations in the littorals, the multi-mission DDG 1000 will be the first US Navy surface combatant to use electric power for propulsion and combat technology.

Scheduled to be launched and christened in 2013, the first DDG 1000 vessel completed 80% of construction to date and is due for delivery to the US Navy in 2014 with initial operations planned in 2016.