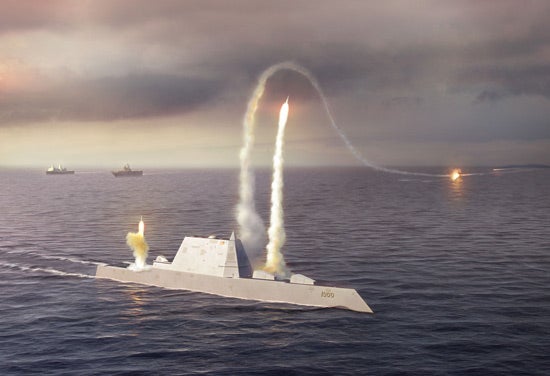 The US Navy has received more than six million lines of software from Raytheon for the DDG 1000 Zumwalt-class destroyer programme, in support of preparations for ship activation and combat system testing.

When integrated with the sailor-centric human-computer interface, the TSCE significantly reduces crewing for the Zumwalt-class destroyers.

Ship activation and combat system testing will be conducted later this year.

"The upcoming tests and ship activation will demonstrate the robust capability and functionality of TSCE, the integrating element delivering mission wholeness for this revolutionary new warship."

The TSCE has already demonstrated its ability to perform in complete operational environments; while the engine control system and core integrated power system capabilities were recently tested to verify automated control of the ship.

Under the DDG 1000 programme, Raytheon serves as the prime mission systems equipment integrator for all electronic and combat systems and is supported by US Navy laboratories, Lockheed Martin, Northrop Grumman and nearly 1,800 subcontractors and supplier partners.

The Zumwalt-class multi-mission destroyer is a next-generation, guided-missile naval destroyer and has been designed to support littoral operations and network-centric warfare missions.

Scheduled to be launched and christened in 2013, the first DDG 1000 vessel is expected to be delivered to the US Navy in 2014, with initial operations starting in 2016.

The second and third ships of the class, the future USS Michael Monsoor and the future USS Lyndon B Johnson are scheduled to be delivered in 2016 and 2018 respectively.