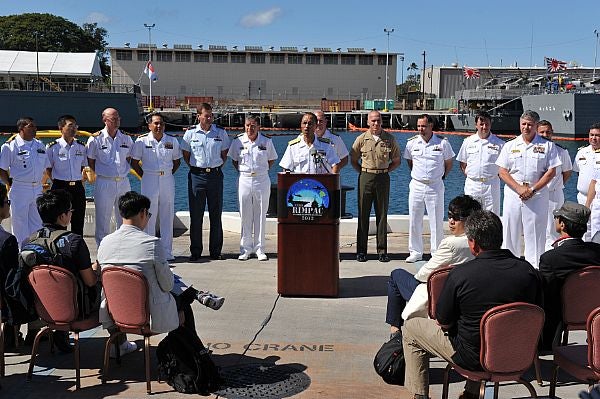 The biennial Rim of the Pacific (RIMPAC) 2012 exercise is formally under way in the Hawaiian Islands area to demonstrate the collaborative defence efforts required in maintaining peace and stability in the Pacific region.

US Pacific Fleet commander admiral Cecil Haney said that the exercise was designed to enhance the tactical capabilities of participating units in major maritime operations, and involved 40 ships, six submarines, more than 200 aircraft and 25,000 personnel from 22 nations.

Claimed to be the world’s largest international maritime exercise, RIMPAC promotes cooperation and interoperability, as well as focusing on ensuring the safety of the sea lanes and security of the world’s oceans, according to Haney.

During the exercise, the US Navy will demonstrate for the first time its ‘Great Green Fleet’ approach with biofuel blends on a few surface warships and aircraft.

The naval and air functional component commands will be led by international partners other than US leaders and the exercise will also include humanitarian assistance/disaster relief (HA/DR).

Navies from South Korea, the Philippines, Russia, Singapore, Thailand, Tonga, the UK and the US will also participate in the exercise.

RIMPAC 2012 is also expected to provide training opportunities for participating navies to bolster and sustain critical cooperative relationships to ensure the safety of sea lanes and security.