Read the latest news about piracy across the globe, with data covering the latest hijacking reports and unsuccessful attacks, plus the response from governments, maritime associations and private firms. 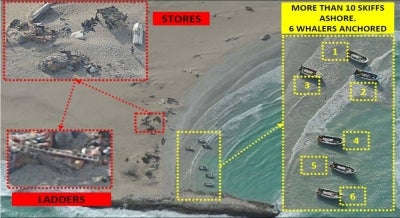 The European Union’s anti-piracy force has launched its first ever land-based attack on Somali pirates, destroying speedboats, fuel and ammunition stores during an air raid.

At least one helicopter gunship participated in the raid, which took place under the cover of darkness, launched from an EU naval ship sailing off the Somali coast. An EU Naval Force (NAVFOR) statement confirmed the attack, stating that all forces returned safely to EU warships upon completion of the mission.

"While assessment is on-going, surveillance of the area during the action indicates that no Somalis were injured ashore as a result of EU action," the statement added.

The attack, which focused on a pirate stronghold located north of Haradheere, follows EU authorisation for its naval forces to launch raids on pirate assets located on land, as part of a new strategy to prevent further piracy.

"Preventing them getting out to sea is a crucial step in removing their impunity ashore and to further the success of counter-piracy operations," said an EU statement.

The current EU anti-piracy operation, which commenced in 2008, involves around 1,500 personnel, nine ships and five patrol aircraft, which are used to patrol shipping routes within the Red Sea, Gulf of Aden and western Indian Ocean.

Speaking on the relatively underwhelming nature of the raid Glen Forbes, Oceanus Live co-founder, noted that the EU operation needs to remain within UN Resolution 1851 while also maintaining the human rights of those affected.

"The raid, which was nearest to the MV Albedo (held over a year now), would have caused a lot of panic and the potential consequence is on the crew of the nearby captive vessels and the protracted ransom negotiations," added Forbes.

Despite its success, the raid has been attacked by critics who suggest that not only could it lead to an escalation of conflict, but that it fails to address the root cause of piracy – the ongoing problems in Somalia itself.

Glen Forbes cited the case of the recent attack on the MV Super Lady, which occurred on 9 May 2012, in which an unprecedented amount of ammunition was fired at the vessel. This was considered by some in the maritime security sector to be in response to armed guards being more readily used and to a viral video showing armed guards shooting pirates in an approaching skiff.