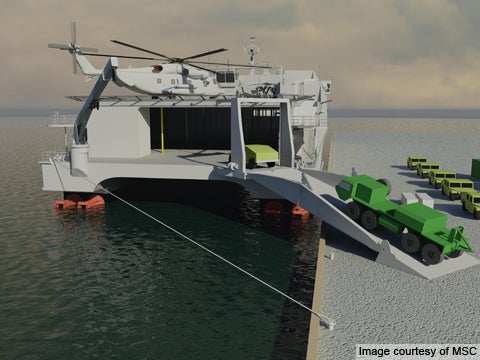 Construction has started on the US Navy's fourth Spearhead-class joint high-speed vessels (JHSV), USNS Fall River (JHSV 4), with the official keel laying and authentication ceremony at the Austal USA shipyard in Mobile, Alabama, US.

USNS Fall River will be built by Austal as part of a $1.6bn contract awarded by the US Navy in November 2008 to build the first JHSV, with options to construct an additional nine vessels.

Operated by the Military Sealift Command, the JHSVs can support a range of missions such as fast intra-theatre transportation of troops, military vehicles and equipment, as well as manoeuvre and sustainment, military logistics and humanitarian relief operations.

"HSV 4 will benefit from increased efficiencies of modular shipbuilding and serial production, building on the success of previous ships in this highly versatile ship class."

Designed to be fast, flexible and manoeuvrable in shallow waters, the Spearhead-class vessels are equipped with helicopter operations surveillance system (HOSS) to enable the aircraft to operate in very low-light conditions.

USNS Fall River is scheduled to be delivered to the US Navy in 2014.