Under President Barack Obama’s current plans, $487bn has already been trimmed from the Pentagon‘s budget as the US struggles to maintain control over an economic crisis that has crippled public spending. These cuts, echoing distinctly similar moves being made by European governments in the wake of the eurozone crisis, have angered defence chiefs who claim the funding that remains is "barely capable" of meeting the current US strategy for national defence.

Many detractors of Obama’s defence spending policy have highlighted that should anything extraordinary happen, something that falls outside of the current US strategy, then more money would have to be found in order to fulfill the US armed forces’ obligations.

With the situation in Syria teetering towards civil war and Iran continuing with its nuclear programme, it could prove to be a foolhardy decision to rule out extraordinary military actions before 2022.

Savings from the US defence budget are mainly being found through the nation’s withdrawal from Iraq and planned pull-out from Afghanistan, with American involvement scheduled to end in 2014. Obama has subsequently pledged that now is the time to rebuild America, hinting at a more isolationist policy than his predecessors.

"Savings from the US defence budget are mainly being found through the nation’s withdrawal from Iraq and planned pull-out from Afghanistan."

Alternatively, Romney has announced his intention to reverse Obama’s stringent defence cuts entirely, boosting the defence budget by approximately $2.2 trillion during the next decade. Under Romney’s policy, defence spending would have a floor of four percent of GDP; with defence spending rising 17% in 2013 should Romney win the White House.

The Republican candidate has, however, come under criticism for such measures. Increasing the Dod‘s budget at a time of economic crisis has been labelled reckless by some who argue that the money could be better spent creating jobs and helping economic recovery in the US. This argument has been strengthened by the revelation that under Romney, defence spending would actually increase beyond what has been requested by the DoD.

Although this surplus could be earmarked towards the possibility of an escalation in the circumstances surrounding Syria or Iran, awarding the DoD with extra finance during a recession is likely to cause significant discontent. Given the US Army’s penchant for waste, Romney’s defence spending floor is likely to prove unpopular.

Naval upgrades under the Republicans 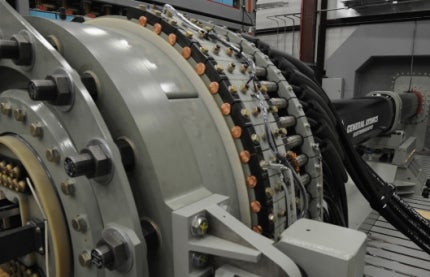 Development of prototype railguns could be accelerated as part of modernisation plans. Image courtesy of the US Navy

Such increases to the defence budget are intended to boost capabilities across the board, with Romney pledging to modernise ageing inventories across the US Army, Air Force and Navy.

"Given the US Army’s penchant for waste, Romney’s defence spending floor is likely to prove unpopular."

One major implication for the navy will be an increase to the rate of shipbuilding from the current rate of nine vessels each year to 15, with particular interest likely to be given to the US Navy’s fleet of Littoral Combat Ships. Advances in shipbuilding technology in recent years have facilitated increases in shipbuilding rates, most notably in the construction of Virginia-Class submarines.

Another improvement that Romney has pledged is a shorter design and delivery cycle for weapon systems, ensuring that US defence forces are provided with cutting-edge weapons as and when they become available. Romney intends for this to remove the current attitude of planning for future capabilities, which has led to expensive put-backs in the past, while also working towards the modernisation of the armed forces.

One particular programme that this could be applied to is the US Navy’s electro-magnetic railgun, which has seen extensive testing in the past year. February’s test of Bae‘s proposed weapon has been followed up during the past month with the Office of Naval Research carrying out testing on a prototype delivered by General Atomics.

With the ability to propel a projectile distances of up to 220 nautical miles at speeds of between 4,500-5,600mph, fielding a working railgun promises to be a significant advancement of future naval capabilities.

Railguns consist of two parallel metal rails, between which a projectile held in an armature is loaded, completing a circuit between them.