The UK’s Trident programme has proven to be a hugely contentious issue of national security. While the UK’s need to harbour an efficient nuclear deterrent is argued for by many, it is also popularly regarded as too expensive to sustain.

The global economic crisis has only served to exacerbate monetary concerns and, with the UK’s current Vanguard submarines approaching retirement, any discussion as to their replacement is likely to be highly controversial.

Although a decision is yet to be made due to the differing opinions of the coalition government’s Conservative and Liberal Democrat parties, a number of lucrative contracts have been awarded in recent weeks, reigniting debate regarding the future of Trident.

"The UK’s Trident programme has proven to be a hugely contentious issue of national security."

Since their introduction in 1994, the four Vanguard-Class nuclear ballistic missile submarines have been the cornerstone of the UK’s nuclear deterrent. Designed to hold the Trident II (D5) missiles acquired from the US, it wasn’t until February 2001 that all four vessels had commenced their maiden patrols.

With the Vanguard-Class submarines expected to retire from service by 2028, a further class of submarines will be required to maintain the UK’s nuclear deterrent.

Dubbed Successor, the class of submarines are due to be powered using the same PWR3 nuclear reactors used aboard the Astute-Class SSNs and will have a projected life span of around 25 years.

The UK Ministry of Defence announced the award of a £350m contract to UK companies BAE Systems, Babcock and Rolls Royce on 22nd May 2012.

The Vanguard submarines were built by Vickers Shipbuilding and Engineering Limited (now BAE Systems Marine) at Barrow-in-Furness. They are the largest submarines manufactured in the UK.

BAE Systems was awarded the key contract pertaining to the design of the submarines, worth £328m. The work will be conducted at BAE’s submarine site in Barrow-in-Furness, with BAE Systems Maritime Submarines managing director, John Hudson, stating the contract’s importance for the site.

"Not only does it help sustain the jobs of [more than] 1,000 skilled employees currently working on the programme, it also provides the opportunity to grow our workforce by a further 280 in 2012," Hudson said.

Babcock, awarded a £15m contract to design parts of in-service support, is set to be involved heavily in Tier 1 of the engineering process of the new submarine’s design. Babcock’s Integrated Management Services director, Andy Nicholls, said: "The cost of a design and procurement of a submarine is outweighed by the cost of its through-life support, and decisions taken early in the design phase will impact any platform throughout its lifestyle."

"The objective is to identify the impact of design decisions on supportability so as to optimise the balance between supportability, performing unit production cost and cost of ownership," Nicholls added.

The second, more expensive contract is related to the production of reactor cores for the seventh Astute-Class submarine and the first Successor submarine. Rolls-Royce will receive £1bn for the reactor cores, with funds also diverted towards an 11-year refit of Rolls-Royce’s plant at Raylesway. The plant is Britain’s only factory capable of producing submarine propulsion reactors, and the refit will result in the creation of 300 jobs.

"The UK Ministry of Defence announced the award of a £350m contract to UK companies BAE Systems, Babcock and Rolls Royce on 22nd May 2012."

Prior to the formal announcement of the contract, Defence Secretary Philip Hammond told the BBC of the importance of the factory’s refit, saying: "This is sustaining a sovereign capability in the UK and some very high-end technical skills in the UK for the next 40 or 50 years."

The scale of the investment into the programme, even though plans regarding the future of the UK’s nuclear submarine fleet are yet to be finalised, is likely to rile some quarters at a time of economic difficulty. The UK Government previously announced its expectation to spend approximately £3bn by 2015 on prepatory work for the new submarine fleet.

Concerns regarding this expenditure are unlikely to be allayed by Philip Hammond, who has continually insisted that the government is yet to make up its mind surrounding the future of Britain’s nuclear deterrent.

"The government’s policy is very clear. We are committed to maintaining a credible nuclear deterrent and we are placing orders now for the long-lead items that will be necessary to deliver a successor to the Vanguard Class submarines in the late 2020s," Hammond confirmed. 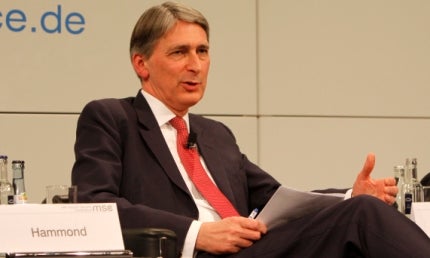 Any submarines designed to directly succeed the Vanguard Class of submarines are likely to require a significant investment and, as such, have the potential to cause fractures within a coalition government formed of two parties with opposing views on the necessity of the programme.

"The second, more expensive contract is related to the production of reactor cores for the seventh Astute-Class submarine and the first Successor submarine."

The Conservatives have been pushing for a direct replacement for the UK’s existing Trident submarines, whereas the Liberal Democrats are against such a move and initially pledged to investigate cheaper alternatives in the party’s election manifesto.

Lib Dem defence minister, Nick Harvey, has been tasked with investigating such alternatives; however former Lib Dem leader, Sir Menzies Campbell, has spoken of his support for the programme, describing the plans as "sensible."

Opposition to the project is not, however, strictly limited to factions within the governing coalition.

Scottish Government strategy secretary, Bruce Crawford, has been outspoken on the issue, telling the BBC: "This isn’t about jobs, it’s about the obscenity of spending £100bn on a weapons system that’s no longer required, that’s not an economic proposition and is morally unjustified."

Whatever decision is made, it will not be made before the UK general election in 2016 in order to allow time for cheaper alternatives to be investigated.

Trident has proven to be a political flashpoint given the balance between the necessity of a deterrent and the heavy financial burden involved.

The MoD moved quickly after the announcement of the contracts to confirm that while a final decision was not needed until 2016, detailed work and investment into reactor cores was necessary now to not only cater for the long lead time, but to also ensure that the Successor submarines are as technologically advanced as possible.

The Submarine Market in the United Kingdom to 2024: Market Brief

The Submarine Market in Saudi Arabia to 2024: Market Brief