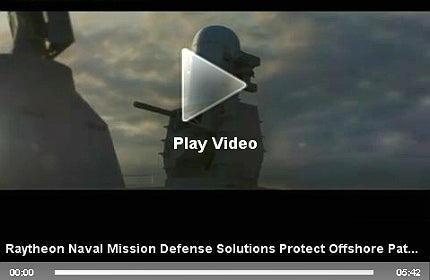 Raytheon identifies two main littoral domains over which maritime operations occur. Closest to the shore is the exclusive economic zone (EEZ) where critical maritime and trade assets are located. Further out is the Blue Water domain where sea lands must be protected to ensure safe free trade. Each is characterised by unique geographic constraints, vulnerabilities and threats.

In its video, the company steers admirably clear of name-checking its products as it describes the layered defence solutions that can be sued to address the entire detect-through-engage sequence based on the mission and threat environment.

Piracy in the EEZ

"Should the pirates continue to advance, a less than lethal capability could be deployed, and the pirates quickly retreat."

In Raytheon’s first scenario, a small band of pirates disguise themselves among offshore fishing boats in the EEZ. With their sights on high-value tankers and container ships that pass through the EEZ, several pirate vessels wait among the fishing vessels to attack their target.

A nearby offshore patrol vessel (OPV) launches an unmanned aerial system (UAS) to survey the area. The UAS detects the boats, and the sensor data is relayed to the OPV’s command centre, where an operator identifies which boats may pose a piracy threat. The OPV is ordered to engage the pirates. As the OPV nears the suspected pirates, it hails the boats, ordering them to leave the area.

Should the pirates continue to advance, a less than lethal capability could be deployed, and the pirates quickly retreat. Although not directly mentioned, this could be Raytheon’s Active Denial System (ADS), a pain ray developed for the US military, which heats moisture in the top layers of the skin.

In another scenario, an aggressor is intent on attacking a strategic asset by attacking an oil platform and manoeuvres a swarm of high-speed boats towards the oil platform, perhaps hinting at Iran’s development of a fast attack craft fleet.

An OPV detects the formation of boats as they appear on the horizon, and an airborne UAS is sent to vector and classify the intent of the boats. The UAS operator on-board the OPV observes RPGs and machine guns, determining the formation to be a swarm of hostile boats.

Simultaneously, the air-search radar operator on board the OPV detects three low-flying aircraft also flying towards the oil platform in a coordinated attack. Realising they have been sighted, the aggressors begin firing.

The OPV engages the aircraft with short-range surface-to-air missiles, perhaps Raytheon’s Patriot missile system. All three aircraft are quickly destroyed before they can threaten the oil platform. The OPV engages the swarm with surface-to-surface missiles and the remaining boats retreat. The OPV has successfully protected the oil platform by deploying a layered defence tailored to the threat.

"In Raytheon’s final scenario, a naval task force is escorting ships on a humanitarian aid mission."

A final ASCM enters the inner boundary, and a close-in defence weapon system, such as Raytheon’s Phalanx solution, automatically detects tracks and successfully engages it.

The rise of the offshore threat

Although Raytheon’s video is clearly designed to market its offshore defence solutions to naval, coast guard and customs customers, it is a clear illustration of the increasing threats faced by these agencies, and the coordinated, layered approach needed to address them comprehensively.

When the Royal Navy’s newest submarine, Astute, ran aground shortly after being commissioned in October 2010, it risked serious damage to essential systems and the safety of crew members.