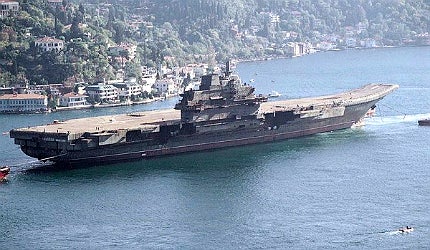 The trials saw the aircraft conduct landing missions from the carrier, validating its capability while meeting navy requirements with good compatibility.

Commenting on the trial, PLA Navy deputy commander vice-admiral Zhang Yongyi was quoted by Xinhua News Agency as saying: "We have done all these test flights from the very beginning, and finally we mastered the key skills for the landing of carrier-borne aircraft."

In addition to conducting a certain level of operations at sea, Liaoning is set to be deployed to the disputed waters of South China Sea amid rising maritime tensions in the Asia-Pacific region.

BAE Systems awarded a contract to Babcock which will see the latter provide system definition to support the UK Ministry of Defence’s programme to replace its fleet of Vanguard-Class nuclear submarines.

Babcock Defence Systems Technology director Jeff Lewis said that the company will provide system definition at a lower risk and cost of development, and aims to minimise through-life costs of the WHLS, SSE and the overall platform.

Lockheed Martin chairman and chief executive officer Bob Stevens said: "The F-35B is the world’s only fifth generation, supersonic, stealthy combat aircraft that can also hover, take off and land virtually anywhere marines are in action."

The addition of the three JSF aircraft, which are assigned to Marine Fighter Attack Squadron 121, takes the total number of JSF aircraft delivered to the USMC to 16.

At present, USMC is operating 13 STOVLs for pilot and maintainer training and has been assigned to the 2nd Marine Aircraft Wing’s Marine Fighter / Attack Training Squadron 501 at Eglin Air Force Base, Florida, US.

Babcock received a through life in-service support contract from the UK Ministry of Defence to support precise time and frequency standard equipment on the UK Royal Navy’s submarine fleet.

Following on from a contract previously awarded in 2007, Babcock will support the system through a life post design services (PDS) contract for its fleet of Vanguard and Trafalgar-Class submarines, shore reference facilities, military headquarters and shore development and integration facilities.

"A final design and production plan for the ACTUV prototype will be prepared by the company."

DARPA’s autonomous vessel has been designed to follow enemy submarines for months and travel thousands of miles without major intervention and with limited human assistance.

A final design and production plan for the ACTUV prototype will be prepared by the company under the programme’s second phase, whereas construction and government testing of the prototype is scheduled to be complete in the third and fourth phases respectively.

As the US Navy tested a second prototype railgun, the UK Royal Navy’s plan to replace its Vanguard fleet progressed further.

Naval activity in China was sparked by the entry into service of Liaoning and a territorial dispute with Japan.