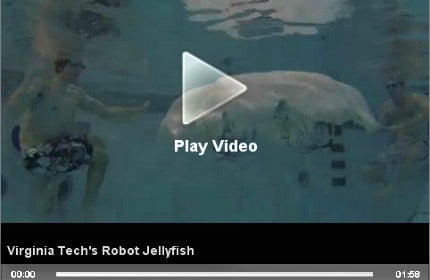 Biomimetics, or using inspiration from nature to design novel technology, has resulted in military robots that can move faster, such as Boston Dynamics’ Cheetah, or in new ways, sneaking into tiny spaces, like AeroVironment‘s Nano Hummingbird UAV or Georgia Tech’s Scalybot snake robot. As they become ever more lifelike, one advantage of making robots that look like animals is invcreasingly coming to the fore – they can hide in plain sight among their natural brethren.

"Cyro is based on a pint-sized technology demonstrator predecessor, the RoboJelly."

This is never truer than in the vast volume of ocean waters. Though submarines or unmanned underwater vehicles (UUVs) would soon ping up on a sonar or radar search of a monitored area, who would look twice at a jellyfish cruising through?

This video shows Virginia Tech researchers taking the 170 pound, five foot seven inch Cyro robotic jellyfish for a swim, demonstrating its lifelike undulating method of locomotion. Cyro is based on a pint-sized technology demonstrator predecessor, the RoboJelly, built by the same team headed by Shashank Priya.

Cyro is the result of a multi-university US$5m project, funded by US Naval Undersea Warfare Center and the Office of Naval Research, to develop self-powering, autonomous robots to carry out surveillance and monitoring, as well as gathering environmental and biological data.

Jellyfish surveillance: how to slip through the net

The jellyfish format is an attractive one for robot researchers to mimic as it uses very little energy, and the increased size uses even less, as well as enabling a larger payload to collect, store, analyse and communicate sensory data, both important factors for lurking surveillance. Cyro is powered by a rechargeable nickel metal hydride battery, and could pulsate its way around the ocean for months at a time before needing to be recharged.

"The jellyfish format is an attractive one for robot researchers to mimic as it uses very little energy."

Cyro is currently a prototype, and years away from being used in open waters. A new prototype is already under development, which the researchers hope will demonstrate reduced power consumption and look and behave even more like a natural jellyfish.

"It has been a great experience to finally realise the biomimetic and bio-inspired robotic vehicles," Priya said. "Nature has too many secrets and we were able to find some of them but many still remain. We hope to find a mechanism to continue on this journey and resolve the remaining puzzles."

The US Navy wants its divers to operate at unprecedented ocean depths in a lightweight, agile, swimmable diving suit without resorting to lengthy decompression procedures.

Never Trust, Always Verify - Is Zero Trust the Next Big Thing in Cybersecurity?