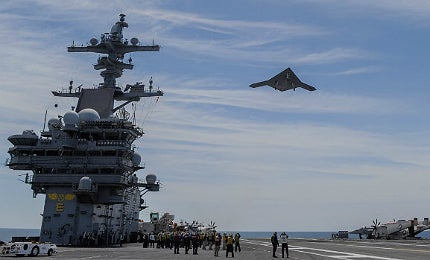 The new approach involves encoding a laser with a radar signal for improved image quality, which holds the potential to enhance fleet activities, including mine detection and seafloor mapping.

The aircraft flew autonomously for 65 minutes after its launch, conducting several planned low approaches to the carrier before safely landing at Naval Air Station Patuxent River.

In the next few months, the aircraft is scheduled to undergo additional shore-based testing at NAS Patuxent River, with the aircraft then conducting a final carrier-based arrested landing demonstration.

The New York Times quoted undisclosed US officials familiar with classified intelligence reports as stating that the Yakhont missiles were equipped with advanced radar for enhanced surveillance capability.

The move came just days after the US and Russia planned to arrange an international peace conference on Syria in early June with representatives from the Syrian Government and its opposition, to end conflict in the country.

The Italian Navy announced its intention to develop a new generation of low-cost vessels boasting duel-use capabilities, with chief admiral Giuseppe De Giorgi quoted as saying that preliminary approval for six vessels has already been granted.

"The ship I have in mind to accompany the FREMMs would be conceived from the start as dual use, fast and modular," he added.

De Giorgi further described the new ship as featuring a hangar for two NH90s or one AW101 helicopter and a fixed-array radar, as reported by Defense News.

"We need to replace the Maestrale-Class and the Soldati-Class of vessels, as well as the corvettes and patrol vessels, vessels which are on average 30 years old," De Giorgi said.

The Republic of Korea Navy will acquire maritime patrol aircraft to boots the country’s surveillance capabilities after receiving approval from the country’s joint chiefs of staff.

Yonhap News Agency cited an unnamed military source that the navy is considering the purchase of 20 maritime patrol aircraft with the aim of strengthening its surveillance capabilities, as tensions with North Korea remain fraught.