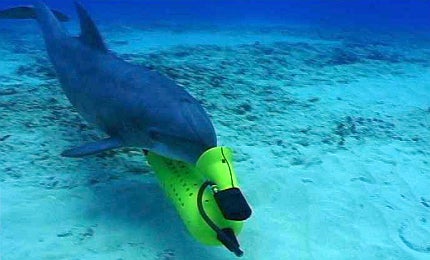 Dolphins of war – a brief intro

The fearsome intelligence and relatively benign nature of our flippered friends has made Tursiops truncatus, more popularly known as the common bottlenose dolphin, a well documented ally in the naval battlespace.

The US Navy has been using dolphins since the 1950s after realising that dolphins could work as divers without the human deficiencies, such as the bends or decompression sickness.

While the mine-wielding dolphins envisaged in the 1973 film Day of the Dolphin have not come to pass, mine detection as well as search and salvage has been the traditional occupation for naval mammals.

And according to Ukrainian sources, it’s not just the US – ten such dolphins are now undergoing training in Ukraine’s state oceanarium.

It must be said that dolphins have not been used as first-line combatants – no reputable reports exist of gun-toting dolphins or mammals strapped with explosives, and such abuse is of course unthinkable. It’s not in their nature either; while dolphins can and do get angry, no record exists of dolphins killing one another in the wild.

"Mine detection as well as search and salvage has been the traditional occupation for naval mammals."

Tagged under ‘biomedical’ the US Navy’s latest call for small business research lists:

OBJECTIVE: To develop probiotic pharmaceuticals to treat and prevent gastrointestinal disease in dolphins and improve their health through the utilisation of indigenous commensal microbes of these marine mammals.

In short, the navy is looking for a small business bright spark to help keep their dolphin fleet regular, sparkly eyed and fit for service.

For service? According to the navy their role is to ‘protect harbours and navy assets and to detect and / or mark underwater mines.’

Conscience appeased, small businesses can get to work knowing they are not helping to build a squadron of elite and unrelenting dolphin assassins.

What probiotics can do for dolphins

"In short, the navy is looking for a small business bright spark to help keep their dolphin fleet regular."

Defined as live microorganisms which can confer a health benefit for the host when administered in the right quantities, probiotics are divided into three different categories.

Probiotic drugs are intended to cure, treat, or prevent disease, while probiotic foods are normally enhanced foodstuffs, like yoghurt. Designer probiotics also exist which have been genetically modified, Day of the Dolphin style, to do all of the above, just better.

While the above list (taken from WHO sources) probably refers to more human diseases, their mammalian nature does mean that dolphins are susceptible to a host of ailments common with mankind.

How to make dolphin yoghurt (recipe courtesy of US Navy)

"Probiotic drugs are intended to cure, treat, or prevent disease, while probiotic foods are normally enhanced foodstuffs, like yoghurt."

PHASE I: Provide an initial development effort that isolates and identifies potential probiotic candidates for Tusiops truncatus derived from indigenous commensal microbes of these marine animals.

Then, according to the navy, companies would need to ‘Microencapsulate the candidate probiotic microorganisms for Tursiops truncatus to enable selective delivery to, and release in, the dolphin intestine; enhance viability of the probiotics during delivery into the body; and enhance the viability of the organisms during storage.’

PHASE II: Demonstrate the safety of the commensal-derived probiotic and assess the efficacy of the probiotic for the treatment of gastrointestinal diseases.

Very important too is a detailed shelf life assessment of the product and general feasibility for long-term production of, and access to, a dolphin probiotic product.

Off the shelf would be ideal, preferably available at dolphin-friendly swim or drive throughs.

Finally: Commercialise the product. With or without a stunning commercial shot at SeaWorld.

As far as naval research goes, this is a definite win for environmentalists and concerned citizens in general. A commericalised dolphin probiotic would hold great potential in the care of captive and managed populations world-wide.

So really it’s the dolphins that win. The only real question left is how to re-design the yoghurt pots…

Throughout history, the world’s armed forces have signed up a whole bestiary of recruits, from entire cavalries of horses, elephants and camels, through to carrier pigeons and literal dogs of war.