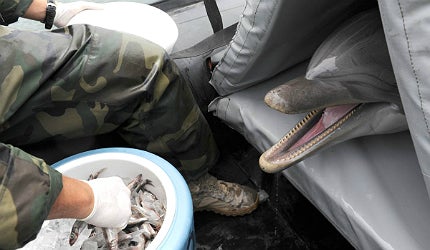 There have been many attempts over the centuries to ‘weaponise’ a wide range of unlikely creatures, including cats, rats and even bats, and while few seemed more improbable than the Cold War vision of killer dolphins, it seems they might soon be back on duty.

According to Ukrainian sources, ten such dolphins are now undergoing training in the state oceanarium, marking a curious return to the tactics of Soviet-era submarine warfare which first saw these marine mammals being trained at Sevastopol for the Russian Navy as far back as 1973.

The full details of that project remain difficult to verify, but it is widely believed that Moscow’s dolphin project broadly paralleled Washington’s – the Navy’s Marine Mammal Program (NMMP).

Established in 1960 to investigate the unique biology of these fast swimming, deep-diving mammals, the NMMP’s original goal was better drag reduction for vessels and torpedoes and improved underwater detection methods. Shortly afterwards, the navy began training dolphins – and some beluga whales and sea lions – for a variety of non-combative support tasks, including assisting divers, retrieving lost objects and performing underwater photographic surveillance.

US dolphins have subsequently gone to war on a number of occasions, notably as sentries in Vietnam, and on mine detection duties during the First Gulf War, but according to the NMMP: "The Navy does not now train, nor has it ever trained, its marine mammals to harm or injure humans in any fashion or to carry weapons to destroy ships."

The idea has often been mooted, however. The 1973 film Day of the Dolphin envisages a trained animal that can attach a limpet mine to a target vessel, while urban legend holds that ‘swimmer nullification’ weapons involving hypodermic needles and dolphin-propelled canisters of compressed CO2 caused the death of 40 Viet Cong frogmen – as well as two US sailors.

"US dolphins have subsequently gone to war on a number of occasions, notably as sentries in Vietnam."

With rumours abounding of Soviet-era cetacean killers, and today’s Ukrainian military sources talking about training dolphins "to attack enemy combat swimmers using special knives or pistols fixed to their heads", it seems that while Uncle Sam has steered clear of creating dolphin death squads, others have not.

While the image of dolphins with hand-guns is, of course, a powerful one and has inevitably caught the imagination of many headline-writers, the reality is probably rather different. The underwater ballistic properties of bullets being as poor as they are, it seems much more likely that in this context, ‘pistol’ means the kind of submarine triggering device which fires, for example, a torpedo on contact, rather than a standard military side-arm.

To fire this gun, our dolphin would, then, simply have to ram the enemy with his head, which is a natural form of dolphin behaviour – not aim it at the enemy and shoot, which clearly is not.

Nevertheless, while there is clear logic to harnessing the natural abilities of these highly intelligent animals to assist injured personnel, detect mines or locate lost equipment, this idea of forging them into front-line troops remains highly controversial.

For anyone brought up on re-runs of ‘Flipper’ or spectacular Sea World displays, teaching dolphins to attack enemy swimmers or lay explosives may seem a step too far, but are these creatures really the natural pacifists we commonly suppose them to be?

"Dolphins definitely have an aggressive side," says Dr. Denise Herzing, affiliate assistant professor in the Department of Biological Sciences at Florida Atlantic University, and Research Director of the Wild Dolphin Project. She explains that these animals naturally defend territories and food resources, either by adopting threatening behaviour to intimidate the competition, or resorting to actual physical strikes.

"It seems that while Uncle Sam has steered clear of creating dolphin death squads, others have not."

Apparently there have been no reported instances of a dolphin killing another dolphin in the wild, although serious injuries have been recorded, and there are suggestions that deaths could have resulted on a few occasions.

Fighting off porpoises and rival dolphins is one thing, but what about humans?

"Although dolphins don’t usually attack people in the water," Dr. Herzing says, "there certainly have been instances, usually after humans harass an animal, where the dolphin has defended itself and attacked, resulting in at least one death that I am aware of." She also mentions one instance where an unprovoked attack by a dolphin ended fatally for a swimmer.

So Flipper, it seems, is not quite as constitutionally opposed to conflict as we might like to think, and Herzing suggests that because dolphins do have the natural aptitude for aggression as well as playfulness, they can probably be trained in both. "Any smart animal’s behaviour can be harnessed to be aggressive," she explains. "Because they are so intelligent they are good problem solvers and like stimulation, so to them it may potentially represent [receiving] attention or a game, rather than understanding the full consequences of their actions."

Their ability to recognise other individuals – and so, crucially, discern strangers – she thinks, might also play a part. "I don’t think dolphins would normally attack a stranger unless they felt threatened, but as a trained defender of persons or territory, they might be cooperative with that idea."

Welfare questions surround the use of an animal for any human purpose – especially a military one – and the universal popularity of dolphins guarantees that the naval treatment of cetaceans is more heavily scrutinised than most. Quite aside of the moral considerations of animal warfare, practical issues such as transportation and training leave many people concerned over the unnatural stresses these animals are exposed to, and in addition there are also the dangers of possible injury in the field to consider.

"The last ‘killer dolphins’ to be stationed at Sevastopol seem to have taken different paths in retirement."

However, even the staunchest opponent of the programme would surely agree that it makes no sense to neglect a highly trained asset, and for members of the US NMMP at least, their care seems both well addressed and fully regulated – but what does life hold for a navy dolphin once it leaves the service?

"Retired navy cetaceans can live long, happy lives," says Loriel Keaton, director of Animal Care and Training at Florida’s Dolphin Research Center (DRC). Although returning any dolphin that was either born, or has lived for much of its life, in human care to the wild is seldom an option, she explains that they retain their willingness to learn new things throughout their lives, irrespective of their previous history. "Years ago, we had a couple of dolphin ‘veterans’ here at DRC. Both lived into their 50s."

The last ‘killer dolphins’ to be stationed at Sevastopol seem to have taken different paths in retirement. In 2000, reports emerged that at least some of these old Cold War warriors – labelled ‘mercenaries’ by Pravda at the time – had been sold to Iran, while the rest appear to have embarked on a new career as therapists for some of Ukraine’s autistic and emotionally disturbed children.

They say you can’t teach an old dog new tricks; when it comes to an old naval dolphin, however, it seems you can.

Subsurface situational awareness is a critical element of any naval force’s operational capabilities.